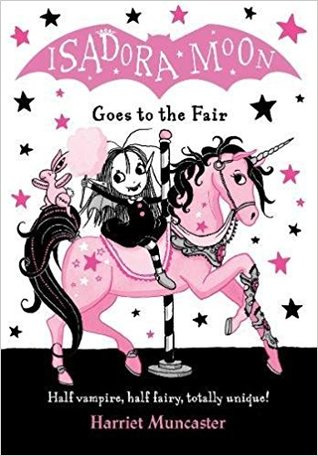 Isadora Moon goes to the fair with her family. A magical, hilarious evening is about to happen!

I was so delighted to see a new Isadora Moon at one of my libraries! I just adore Isadora Moon and the adventures she has. And not only that, I also love that she is part fairy and part vampire. Part black, part pink. 😛

In this one Isadora Moon wants to go to a fair. A human fair to be specific. Her parents are trying to sell her for vampire or fairy fairs (as I expected from them), but no, Isadora is clear. She wants to go to a human fair and see what the fuss is about, see something normal for once. I loved that she tried hard to convince her parents, and that she even promised to do chores just to go (even cleaning up her little sister’s dirty diapers, which shows how badly she wants to go).

I loved that we see 2 of Isadora’s relatives again, Wilbur and Mirabelle, and that they had the chance to come along to the fair (though they were, just like Isadora’s parents, more for the more magical fairs).

I felt so sorry for Isadora, she was looking forward to the fair so much only to find it in disrepair and peeling paint. But at least she has her family. I had a laugh that all of her family wasn’t so averse to help fixing the whole fair, while Isadora tried to keep everything as human as possible. It was so much fun to see the family bring some life into the fair again. With some magical additions, but quite often also just a new lick of paint and some glitter. I thought it was really sweet of them to do this. They really helped out and drew quite a crowd. Can I say that I still love that this world is apparently quite accepting of magical stuff happening? Quite often this kind of stuff has to be hidden, you have to be as human as possible, but it seems in this world it is all good to be in the open.

Of course, like all the other books, this one is delightfully illustrated in pink and black (and white). I just adored seeing the fair, especially after what Isadora and her family did with it.

All in all, a very adorable and sweet Isadora Moon book, and I can’t wait for more!