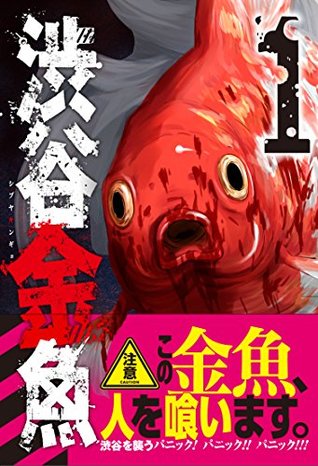 Remember your cute goldfish? You probably gave it some cute name, like Goldie. Well, Goldie has just gone berserk. Watch your limbs. Goldie may just chew off a few of those. 😛

This was one of the manga I wanted to read during this October/Halloween month, I was quite curious about it. Would it be truly horrific, or would it be hilarious, because let’s face it, they are goldfish. I can tell you know, that it was hilarious + horrific. Horririous? Hilaific?

First, let’s start with how it all started. Welcome in Shibuya. We are following a guy who isn’t much into going there but he has to, it all starts pretty nicely with a wonderful and busy Shibuya. At a store he meets a classmate (who I liked at first, but then I didn’t). Everything seems fine, but then poop hits the fan. Gore splatters around and suddenly there is a giant goldfish, with blood around its mouth. Running is futile, Shibuya is fucked, there are goldfish everywhere.

There was/is plenty of gore, because people were being eaten and torn apart by goldfish, which is fairly disturbing, but I was kind of expecting it. My stomach wasn’t all too happy, because I can’t handle gore that much these days, but it just had to live with it. I had to read on and see what would happen. Where did the goldfish come from? Why Shibuya? Are they in other places? We don’t get a lot of answers, but that is kind of expected given that there is no contact with the outside world. The only thing we know is that the world so far is safe. Why? Well, read on, and don’t laugh. I know I did, because it was just utterly silly.

Even more silly, and really distracting, was the fact the goldfish talked. Not sure if they truly talked, or it was just mind stuff, but there is just something truly hilarious about a goldfish who talks. Especially when those words are Mommy, I am home, Hello, Don’t Leave, and others. There were times I was probably supposed to feel utterly horrified by things happening, but then a goldfish would talk and I would roll around laughing.

It also didn’t help that everyone did the horror stupidity stuff that you always see in horror. Oh, hey, I have just been attack, let’s go back to the safe spot. Or hey, I forgot to turn off my cellphone. Or hey, my scrunchy is falling and now I am just doing x. I am so sorry, but I just went between shaking my head and laughing my ass off. 😛

The ending? Oh boy. Oh boy. Really, that just sucked. I get that the manga is still ongoing, but was this really needed? Couldn’t we have gone to another POV? I am sure there are other people still in Shibuya, still hiding, still surviving. Plus, not only that, but I could do without our MC.

He was a pretty decent dude at times, he showed he had plenty of balls and brain, but, I just got tired of his whining.

The art is pretty nicely done, the goldfish are plenty of scary (especially when they go in nomnom mode), and the gore is excellent done. You still see enough of it, but also not too much that it becomes over the top disgusting.

All in all, I did have fun reading this one. Even with a whiny MC, even with the gore, even with some hilarity, I still couldn’t stop reading. Will I continue reading? Mm, I think I will. Maybe not right now, as my stomach wants to have some recovery before heading into gore land again, but definitely soon.