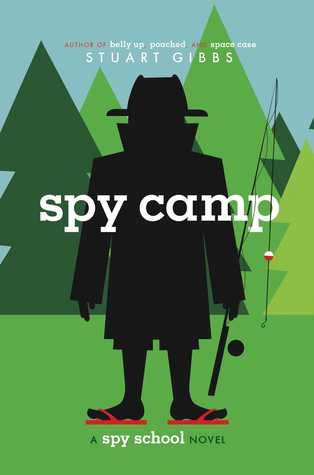 It is time for Spy Camp! Is Ben ready for it?

I have had this book in my possession for some time, but just didn’t feel in the mood for reading it, not even while I was camping myself. Then again, given the book and how little of it is about the spy camp, I guess it is good I didn’t read it during my camping time. 😛

Yep, as you can see from that previous paragraph, this book is called Spy Camp, but actually just a small part of it is about the camp. Which I found highly disappointing. Why call it Spy Camp then? I had expected that this entire book was about him and his friends going camping, seeing what kind of courses and stuff they would have and what they would learn. Instead Ben is quickly whisked away as soon as things get hectic/as soon as SPYDER pops up. After that it is just all survival, him, Erica, and Erica’s dad trying to get away from SPYDER, but also trying to save Ben/Erica’s friends/classmates. Which was fun to read, but again, I came for camping!

Ben is still a fun character, even though he is still quite useless as a spy. Though he is getting better, smarter, and knows more on how to survive and how to get through things. He does have talent, it just needs to be polished, and he will need more training. He was quite brave in this one, though also had some dumb moments that had me rolling my eyes (and laughing). I had an even bigger laugh when he did that during that war enactment and he had to make a diversion. Well, that is one way to do that.

Erica was awesome again, though I did feel sorry that she had to do all the work. Her dad is truly useless (more on him later). I also wish this girl would drop the ice queen act, we can clearly see that she cares about Ben. I wish she was acting a bit more like she was doing when they met up with that relative! She is still a kick-ass girl, and wow, she knows so much and will make an awesome spy one day (though she is one now, but I guess to the adults she is still a kid).

Urgh at Erica’s dad. I just don’t like this kind of character. His ego is just way too big, he can’t do crap, he steals credit and also blames other people for his mistakes, and I could go on. There was just one moment in here where he showed that he can do it if he wants to, but that was just a very short moment and it pretty much ended in him being an idiot again. sighs

I am also happy to see other characters again, though I could do with Warren. What a horrible person that one is. Quite the difference from how the bully (who is now Ben’s friend) is in this book.

I am still laughing at how terrible the spy organisation (and the school) is. There are so many errors, the way they treat people is urgh, they need to believe people more, and maybe get more capable people in their team who don’t suck or endanger missions or people.

The ending was exciting, and a great way to end this book.

There are lots of fun moments with tons of action and spying, and I just flew through this book. I will definitely need to get the next book, I am curious how this story will continue + I need to see if Ben gets better at being a spy.