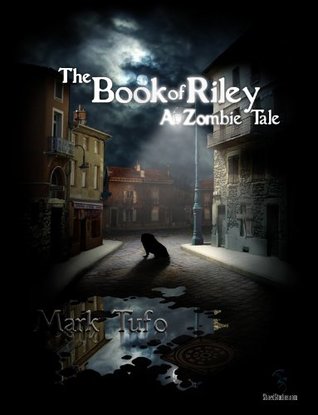 Zombie apocalypse through the eyes of a dog? How interesting! The first time I ever saw a book like this, so of course I had to try it out.

But sadly, it was good and bad. There were parts that had me on the edge of my seat, and there were many times I just wanted to delete the book of my Kindle.

I wasn’t a big fan of the pets, especially Ben-Ben was just freaking annoying with his constant yapping and whining and barking and being a pest. I was so happy when in the beginning it seemed that he wouldn’t be around for long, sadly, he was.
Patches was just your typical cat. Only thinking about herself, being a total bitch in general. Thankfully, as the story continues she seems to get better, and eventually I liked her more than I liked Riley.
And then there is Riley. In the beginning I was already getting a bit annoying with her, because of how wonderful, magical, awesome she thought she was. OMG, I can watch television, I can count till 7, I can do this, and I can do that. It just made her feel less like a dog and more like a very small annoying child. And throughout the book, sorry, I just started disliking her more and more. She kept expecting the humans to just understand her. Yay, you are barking, congrats, but sorry, unlike what you may think, we humans can’t do barks. So let’s just bite her? Yay! rolls eyes Yay, you killed that lizard, I am totally sorry, but we humans don’t just eat raw meat (generally at least). And then there were other parts that just had me rolling my eyes.
Also the constant bickering between cat and dog, dear Lord, please. I get that dogs and cats generally don’t like each other, but urghhhhhhhhhh.

Sure, there were times that I liked Riley, she did help out Jessie, and she showed lots of bravery. But really, for a dog so (according to her) smart, she was acting pretty dumb.

Plus, I almost didn’t make it through the first part. Sorry, but all the talk about poo and pee and vomit, it made my stomach (already not in a happy place today) very upset.

I did think what Winke did was very selfish.

There were still parts that I liked. Again, I liked that this book was from a pet’s view, I haven’t read one before, and I do want more books like this one. I liked that it was a zombie book, perfect for Halloween. I liked Jessie, though she still has a lot to learn if she wants to make it through this new and dangerous world.

And yes, even though I didn’t always like the pets, I do want to continue reading this one. At least one more book, because this one ended on a cliffhanger, and I desperately need to know what will happen next.