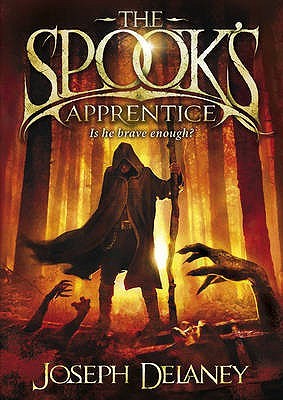 Welcome to a world filled with witches, boggarts, weird things that go bump in the night. It is up to Spook, and his apprentice (Tom, our MC) to save the day.

I believe I have tried to read this series before, or at least I can remember that I bought 2 or 3 random books in the series years ago, but never set to reading it or getting the rest of the books. But, with Halloween nearing again, I decided to read this series, well if it stays good. There are 13 books, and maybe after 5 books I get tired of it, we will see. It would be nice if I had a new supernatural series that I can devour.

Meet Tom, he is the seventh son of the seventh son (not to mention his mam is also special in a way that I hope we will find out as the story continues). Instead of getting a normal job like his brothers, he is about to become apprentice to the Spook. His life is going to be topsy-turvy very fast. Tom was a bit of a wimp at times, but I did like him a lot. I liked how he conquered his fears, how he made the best of the situation, and how he tried to rectify his mistakes (because he does make several mistakes due to him being new to this whole Spook business). I also loved how eager he was to learn all there was about the job, about the monsters that roamed the world.

But of course, the author also shows that Tom is afraid, that is worried about making certain decisions, and later he also sees the real scope of what will happen when he becomes a Spook (or even his assistant for some time). He realizes that it won’t be an easy life. Not only because of the monsters, the threats, the enemies he will make, but also how people (even his family) will treat him.

This book is about Tom’s first adventures. His first encounters with witches, ghasts, boggarts, his first encounter with a girl with pointy shoes. Most of the book is about one certain witch, the wickedest witch, the one in a pit behind Spook’s house. And about her family, just as evil as she is. Or well, for most, because Alice is clearly an in-between upcoming witch. She can be evil, but she can be good, but for all we know she can also be both. The witch, Mother Malkin, was a truly evil hag. One not to be messed with. One to stay away from. One you warn your kids about.

Every time you think you can breathe a bit easier something happens, you are back at the edge of your seat, eagerly waiting to see what will happen next. What kind of dark things will crawl up now?

I am really curious about Mam. What kind of powers does she have? What did she mean when she said she married Tom’s dad specifically for being the seventh son? How did she silence those ghasts back at the farm? How does she always seem to know what is going on? I hope that in the later volumes we find out more about this intriguing character.
Spook was also quite the character, I am still not entirely sure if I 100% like him. His methods of teaching are a bit unorthodox, and he is a bit moody. But he also shows he can be kind and he is always willing to teach. I hope we find out one day how he became a Spook. What kind of adventures did he have during his life?
All in all, I will definitely continue with this series. I hope that the next books are as good as this one, or better! I hope the next book feature some new ghouls and dark creepy crawlers.