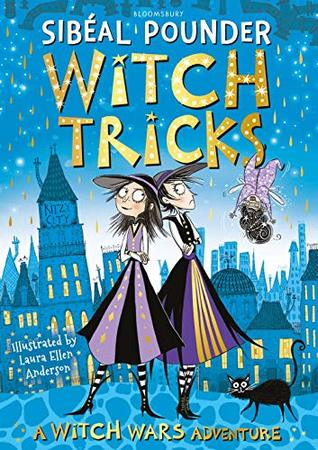 The 6th Witch Wars book, and boy oh boy they stay fun! In this one we have several things, The Points (led by Idabella Bat, yes, the sister of Felicity), Ritzy Six (the worst witches in history with powers of air, fire, earth, water, hair, jam (don’t ask)), Fran having a brand-new show (fighting fairies go go), a special game to get to the peak, cats, cats, and did I mention cats? Oh, and jam! Mm, jam!

Normally I go totally bonkers because of Fran, but in this one she was actually slightly manageable. I loved her new show, and I had quite a few laughs as it was something totally different from Fran’s normal things. No cooking, no drama, but fighting! Yup. Our dearest fairies are going to fight (stage-fight of course, no fairies will be harmed in the production of this… or well, mostly, given that Gigantico threw away a fairy, oopsie), get shiny outfits, there is tons of glitter, funny names (Peanut, Tiny Fists for instance). And sure, at times she shows her very annoying side. I would also recommend her toning down her ego a bit.

Then there is The Points and the Ritzy Six. Of course Idabelle Bat finds that jar with the Ritzy Six in it, and of course she is up to no good. But did this girl really think they (the Ritzy Six) would just share their powers with them? I did like the game that evolved from it. Yep, our Ritzy Six live up the peak, and one can’t just get there by walking. Oh no, you have to do a game. From guessing stuff, to making up songs about bees. And heavens forbid that one makes a mistake. Enjoy being a new part of a scarf (had a laugh at Peggy giving thumbs up and how that showed on the scarf).

Tiga still has tons to learn and find out about magic, but that is OK. I loved the new spell she found out about, one she thought was just a saying, but actually meant it raining down tons of cats. I just love Tiga, how well she is adapting to life with witches and magic, how she made some amazing friends who love and care for her.

Felicity was a surprise for me. I was curious about what she was hiding in her boot, but I never expected it to be that! It was quite hilarious, though I did feel a bit sorry for that poor critter. And she showed some really kindness and sweetness (of course all the while still acting a bit grumpy).

And let’s not forget the fun and wonderful illustrations that make the book even more fun to read. Sparkly, funny, cute, adorable, and so fitting!

All in all, I can’t wait for the next book and I am hoping that there will be many many more Witch Wars books to come. There are enough stories still to be told, adventures Tiga and her friends can have! Eep!