Welcome to the Book Blitz for Billionaires Club Anthology, yes that is right, not one book but 5. I just couldn’t resist helping with the book blitz when I saw that cover (and then read the blurb).

For today’s blitz I got information on the book, a sexy excerpt, and a giveaway (be sure to join!).

Let’s get to book blitzing~ 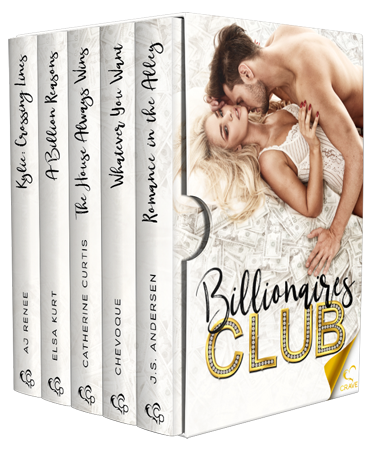 People say size doesn’t matter, but in a world ruled by cash and currency, the size of your bank account does.

When it comes to the survival of the richest, hundreds have no worth. Thousands are mere pocket change. And millions are nothing more than a beginner’s stepping stone.

But when it comes to blistering hot passion, money doesn’t always speak the language of love. There’s the billionaire boss who falls for her sinfully gorgeous employee. And the rich construction worker whose world changes after a hot encounter with a girl from the other side of the tracks. Dollars can’t be turned to hearts.

Follow the characters of these five intertwined novellas and discover that you can’t put a price tag on romance.

All bets are off when finding love is worth more than millions, and risking it all might just be worth it.

Because in this world… it’s all about the billions, baby…

Out of his close proximity, she released a held-in breath and entered the room. Inside, she realised she hadn’t even thanked him, so as she turned back, she found he hadn’t quite stepped away either, and their faces were millimetres apart. The silence persisted, as his smouldering eyes captivated her while her knees locked for a moment too long, before she stepped back.

“Uhm, thank you and goodnight. I seemed to have momentarily lost my manners,” she managed to say.

“Yeah, same to you,” he casually countered, which had her feeling disappointed, as she had hoped he also felt that electric buzz between them, but it clearly hadn’t affected him in the same way. His footfalls headed toward his room and then they stopped.

She peeked around the corner of the doorjamb and saw him look back over his shoulder. Her breath caught at the stark picture it painted, while nothing but the fear of consequences kept her from running after him.

“Just once?” he softly asked.

She took a steadying breath, knowing exactly what he meant. “Yes.”

He turned around with need in his eyes, while she rushed out of the room and met him halfway, with her arms already stretched out.

The collision of their bodies echoed in their lips finding each other’s, while his arms encircled her. The frenzied feelings burst into chaos as she felt his tongue slither over her lower lip before he nipped at the flesh.

A yearning mewl escaped her, and the little space left between them was closed as he lifted her up and she crossed her legs around his hips. Pressing her up against the wall, their tongues danced along with their bodies as he steadily ground his hard member against her sex.

Whatever this was meant to be, she’d rather not think about, but in a few seconds of clarity, she knew this went against the code of conduct for Salexis and her personal morals, so she pushed him away.

He immediately set her down and stepped back until he hit the wall behind him.

Through the panting she found his eyes, familiar eyes she pretended to love for over a year, without realising she had done just that. It wasn’t the love she shared with Joel, it was different in every way, but she had avoided seeing it until now that she was close enough to see it in his eyes, knowing she would soon lose it.