Welcome to the Book Blitz for Dark Arts and a Daiquiri by Annette Marie! I am so delighted I can help out again with another Guild Codex: Spellbound book. I still need to read them, but I just got so many to read I am not getting to them, for now.

For today’s post I got information on this book, an excerpt (which was equal parts exciting and funny), and a giveaway! 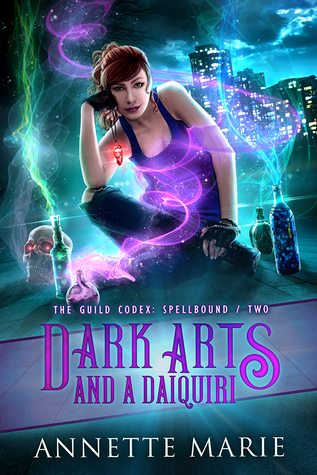 When I found myself facing down the scariest black-magic felon in the city, practically daring him to abduct me, I had to wonder exactly how I ended up here.

It all started when I accidentally landed a job as a bartender—but not at a bar. At aguild, populated by mages, sorcerers, alchemists, witches, and psychics. Good thing this lame-o human is adaptable, right?

Then my favorite guild members—three sexy, powerful, and intermittently charming mages—asked for my help. Did they want access to my encyclopedic knowledge of cocktails? Oh no. They wanted to wrap me up in a pretty ribbon and plunk me in the crosshairs of a murderous rogue to lure him out of hiding.

So that’s what we did. And that’s why I’m here. About to be kidnapped. Oh, and our grand plan for safely capturing said murderous rogue? Yeah, that completely fell apart about two minutes ago.

Why did I agree to this again?

Note: The three mages are definitely sexy, but this series isn’t a reverse harem. It’s 100% fun, sassy, fast-paced urban fantasy.
Tori has no problem getting herself into trouble in every book in the Guild Codex series, but each one is a complete adventure—no cliffhanger endings.

Annette Marie is the author of Amazon best-selling YA urban fantasy series Steel & Stone, its prequel trilogy Spell Weaver, and romantic fantasy trilogy Red Winter. Her first love is fantasy, but fast-paced adventures and tantalizing forbidden romances are her guilty pleasures. She lives in the frozen winter wasteland of Alberta, Canada (okay, it’s not quite that bad) with her husband and their furry minion of darkness—sorry, cat—Caesar. When not writing, she can be found elbow-deep in one art project or another while blissfully ignoring all adult responsibilities.

“This is really nice,” I gushed, unconcerned by the apartment’s lackluster finishes. Beggars couldn’t be
choosers, and having spent the last ten months sleeping on my brother’s sofa, I was ready to overlook
anything less than holes in the walls.

Which, unfortunately, had been included in all the apartments we’d viewed so far, along with
complimentary mold, cockroaches, and suspicious odors. That wasn’t including the batshit crazy
landlords. Did normal people not dabble in real estate investment, or did all the well-adjusted landlords
have tenants already?

“Well, it is a basement.” I flapped my printout. “It says all utilities are included in the rent. How sweet is
that?”

Sin wrinkled her nose suspiciously. “It’s too cheap. There’s got to be something wrong with it.”

“Maybe there’s a hobo living in the crawlspace.” I pointed at a half-height door tucked in a corner of the
living room. “That’s a crawlspace, right?”

We crossed the room and I crouched at the door, Sin leaning over my shoulder. I pulled it open. Inside
was nothing but impenetrable darkness.

“Use your phone’s flashlight,” Sin suggested. “There must be a light switch or—”

Chill air whispered over my skin and all the hair on my body stood on end—then arctic wind blasted me
in the face.

I recoiled, crashing into Sin’s legs. She landed on her ass as the wind howled out of the crawlspace,
whipping dust through the room. My printouts went flying and we scrambled backward on our butts with
the papers spiraling toward the ceiling.

The darkness in the crawlspace leaked out from the doorway and pooled on the floor like ink. Shadows
writhed and something pale materialized in the threshold—a skeletal woman on her hands and knees,
toothless mouth gaping, empty eye sockets dribbling black blood.

I took one look at the moaning specter and screamed like the sissy girl that I am.

Sin let out her own terrified shriek as the ghostly woman dragged herself out of the crawlspace, her long
hair trailing on the floor. She stretched a hand toward us, blackened fingers curled like claws, and icy
gusts lashed at our faces. Still screaming, Sin grabbed my arm, her fingernails digging into my skin.

Sharp pain cut through my panic.

I jammed my hand into my pocket and whipped out my trump card—yes, a literal card.

My trusty Queen of Spades was more than it appeared: a sorcerer’s artifact embedded with a spell that
reflected magic. Was there any magic here to rebound? I had no idea. Would it work on a ghost? Also no
idea. I wasn’t a sorcerer. I was a crime-of-convenience thief and I had only the vaguest notion how to use
the card.

But it was the lone magical defense I had, so I thrust it at the phantom and shouted, “Ori repercutio!”

The air rippled and the gale-force wind reversed direction. It slammed into the woman, flinging her back
into the crawlspace. Her head hit the door frame with a whack.

Sin’s scream cut off. In unison, we launched to our feet. We weren’t screaming anymore, but I for one
was even more freaked out. The woman was too solid to be a ghost, but holy freaking shit, that body did
not belong to a living being—papery skin clinging to bones, empty sockets for eyes, stringy hair down to
her knees.

The ghost woman sprang up, raising her hands like claws. “Begone from this place,” she moaned.

I tilted my head toward Sin, not daring to take my eyes off the not-a-ghost. “Hey, Sin. Is that … a
vampire?”

“No.” She pulled a handful of vials with colorful liquid contents out of her purse. “Not even close.”

Selecting a bottle, she dropped the others back into her bag and unscrewed the top. A hideous smell like
burnt iron singed my nose.

“No!” the woman shrieked—except she didn’t sound like a woman anymore. Her voice was two octaves
higher and painfully nasal. “Don’t!”

Sin held out the bottle threateningly. “Show us your real form or I’ll drench you!”

“Noooo! Go away!” The woman stomped her foot. “Stupid humans! This is my house!”

Raising her hand higher, Sin started to tip the bottle.

“Uuuuugh. Fine.” The woman threw her hands up—and her body melted. It lost solidity and shrank, then
reformed into something new.

The creature was dark green with skin the waxy texture of pine needles. Even with twigs sprouting off its
large head in place of hair, it barely reached my waist, and a mixture of spruce branches and pine cones
hid its torso. Thin arms and legs stuck out of the twiggy mess, its hands and feet comically oversized.

The creature pointed an accusing finger at us. “This is my house! Leave or I’ll turn you into bean
sprouts!”