Today, finally, the newest book by Carrie Aarons is releasing, You’re The Only One I Don’t Want! So, a celebratory welcome to the release day blitz!

For today’s post I got an excerpt (which you may have seen in the teaser reveal) and information on the book/author.

The happiest of book birthdays to the author, congratulations on your book coming out! throws tons of glittery confetti 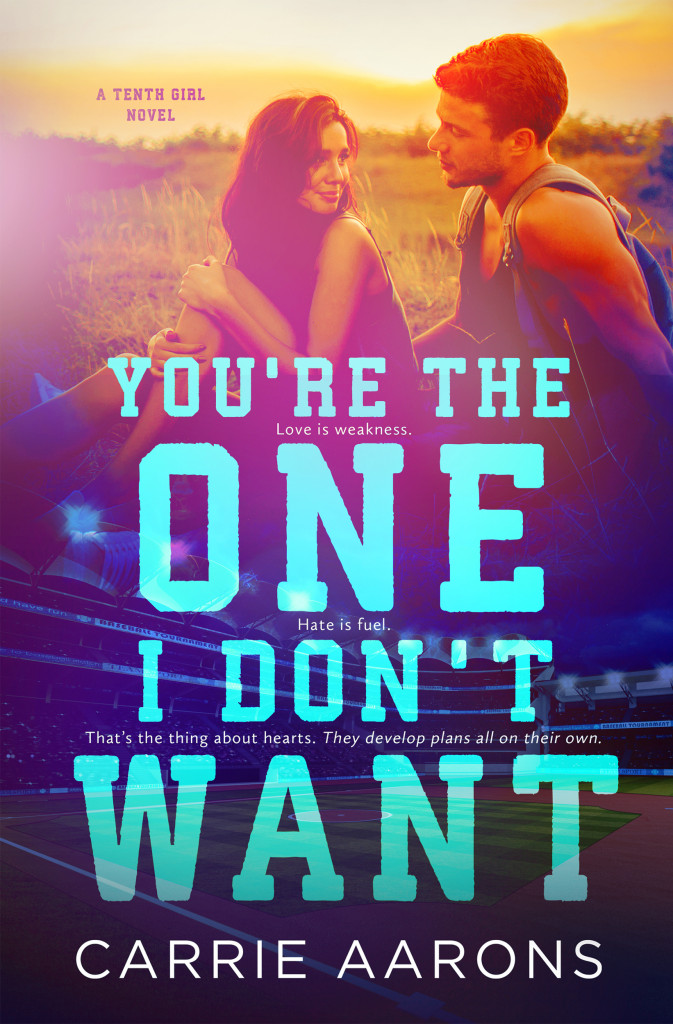 Excerpt time! This is from Chapter 6.

I only have an hour in between my workout and the film session that the hitting coaches want us to attend.

My entire schedule since moving to Austin has been busy as hell and completely out of whack. Between getting my class schedule figured out, sprinting across campus to get to the buildings, dealing with my moving company, figuring out where to park my car in front of my building, practicing with the Triple-A affiliate team I was drafted to and everything in between … I’m fucking wiped.

I’ve been scouted for the major leagues since my sophomore year of high school, so I thought I’d been semi-prepared for what was to come, but my mind feels like it has been put in a blender for the last two weeks. I had so not been prepared. It was as if I was hobbling around in the dark in my new reality, trying to grasp at things before they moved on me.

From the few times I’d visited Austin for tournaments or the odd family trip, I remember we’d gone to Big Cheese’s Grill. They boasted the best burgers in town, and it was close enough to campus that the place was always packed with students and professors alike.

I open the door to the restaurant while glancing at my iWatch to check the calories versus fat burned during my workout.

And I slam right into a body.

I bounce back, shocked at the person who just rammed into me. I fumble to hold on to them, to keep our gravity from sending both of us flying. I fail, and the body falls backward, the door slamming into my back. I absorb that blow and keep upright, thank God, or I would have been sprawled flat on top of whoever just plowed into me.

My head is down, trying to collect its scrambled thoughts, as I reach for whoever I just knocked to the ground. “I’m so sorry, I didn’t realize you were coming out—”

The air and words leave me as I pull her up. Her hand is still in mine as we stand face-to-face, my surprise mirrored back at me. Those lips, the lashes, the eyes a rich, deep, soul-searching brown. The freckles across the bridge of her nose that make her look more innocent than she actually is.

A current of tension radiates back and forth between our interlocked hands, and I can smell the glass of wine she must have just drunk on her breath. It’s sweet with a bite of alcohol, and my mouth waters for a drink. I haven’t thirsted for alcohol in five years, yet in one chance meeting, Annabelle has me reaching for a bottle. She’s poison to me, makes me want to do crazy things. I drop her hand as the thought crosses my mind, as if she’s burned me.

“You should really watch where you’re going. Or did you knock me down on purpose?” Annabelle sniffs.

I scoff, “Right, I often go around pushing women to the ground on purpose. I see the cold hard ice hasn’t melted off your personality, Annabelle.”

And a woman she is. So much more grown up than I remembered her. She’d always been beautiful but gone was the gangliness of teenage years. This is a woman who stands in front of me, curves abound and an unseen knowledge of the world to match. I couldn’t help but get that jab in there.

“And I see you’re just as focused on yourself as ever. You never did care what anyone else was doing, did you, Boone?” She folds her arms over her chest and my eyes stray to her boobs in a sizzle of heat between us.

We’re like a bunch of children fighting like cats and dogs out in the street. How can she still pull out every insecure and immature trait within me? My brain is moving seconds slower than it usually does, and I know I’m standing here staring too long. Even though I hate Annabelle Mills, I can’t help but memorize every detail about her for the first time I’ve seen her in about five years.

“Move.” Annabelle pushes past me, not using any manners, and starts to stalk down the sidewalk.

Talk about rude. She’d always been aggressive, harsh, and just a little bit more high-maintenance than any of the other girls. It’s what had drawn me to her. And then seeing those glimpses of vulnerability, that’s what had made me stay. It was addicting feeling like you were the only one who got to see the nice side of the mean girl.

I should walk into the restaurant. I should pick up my to-go order and drive back to my apartment where I’ll eat a quick lunch and change and go to the practice facility.

But a flash of Annabelle in the bar the other night dances through my head. And her callous words just now piss me off even more.

She always did have the perfect way of getting under my skin and driving me wild. When I’m around her, I forget who I am. I turn into some raging bull, with a fuse shorter than the bombs Itchy and Scratchy use on each other.

The stupidest thing I could do right now? Stomp after her, yelling, in the middle of a crowded downtown street.

So that’s exactly what I do.

“You really haven’t changed a bit!” Oh, fuck. What am I doing?

“Yeah, like I said, I can see that.” Lord, my mama would be so disappointed in me agreeing with a woman that she was a bitch.

“Well, no one said you had to be around it. You’re the one who moved to my city. You’re welcome to leave.” She waves around like I should just get out of here.

I fist my hands in my hair. Christ, she’s so aggravating. “No can do, I’m getting paid to be here.”

She rolls her eyes. “Like I’m not? Have you watched TV lately? Or did you take one too many fly balls to the head? I know there weren’t a lot of brain cells in there to start.”

Fuck her. Now it’s time to really piss her off, get under her skin like she’s under mine. “Oh, you mean that show you play house on or whatever? They’ll get bored of you when the next eye-candy pageant queen comes along.”

I swear Annabelle could spit nails at me if she willed it right now. “You’re an asshole, Boone Graham. You’ve only ever cared about yourself and where you want to be. It was silly of me to think you’d ever think of someone but yourself.”

I drop the anvil. “Says the girl who cheated on me. Who lost her virginity to another guy.”

People around us are starting to stare, to really look at the two people arguing openly on the street. It’s not a good idea for me to stick around any longer; people know who I am on a national level and being seen fighting with a girl, who someone will inevitably social media stalk and find out is my ex, is not good publicity.

Except I can’t stop staring into Annabelle’s eyes. They are furious, yes, but there is something more there. I’ve really … hurt her. I’m shocked, to be honest. I didn’t think I could remotely hurt this girl, who self-identifies as a cold, heartless bitch.

But there it is. The raw flash, miss-it-if-you-blink second of real pain that flickers through those mocha pools. I open my mouth to say something, to take it back, maybe apologize, but she speaks first.

Her tone pulls at my heartstrings, it’s low and somber. And then she melts into the crowd, giving no explanation of what I have no idea about. 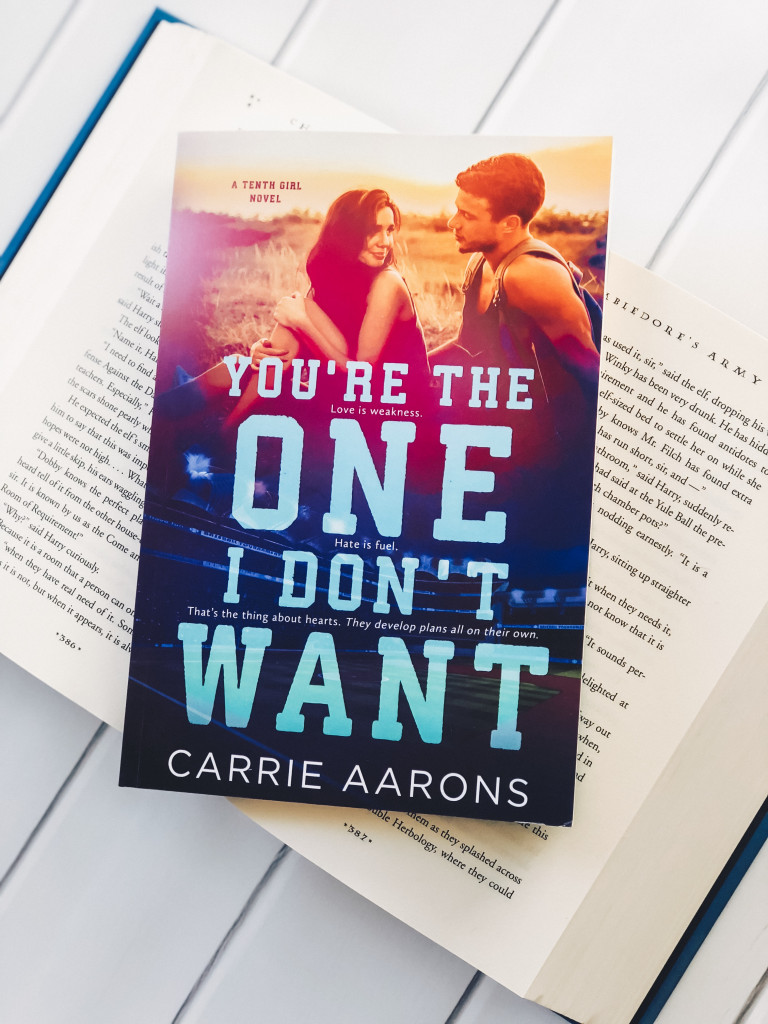