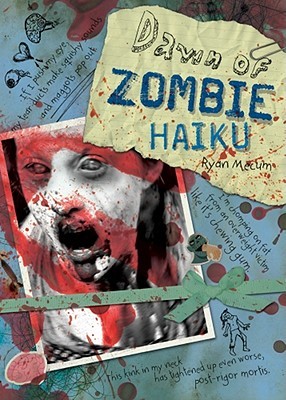 I bought this one at Boekenfestijn (which I visited yesterday). I am normally not that into books with poetry/haiku/verse, and I am also kind of trying to read less zombie books (too many nightmares), but I still couldn’t resist this book. A book about a girl in the midst of zombie apocalypse? Turning into a zombie herself (ha, no spoiler, the blurb spoils it all already, thanks btw).

The book starts off with our girl telling us why she started writing haikus, and then the zombies start pouring in. Luckily, our girl and her dad are zombie aficionados. So they form a plan, and off they go. We meet our MC’s boyfriend (as I would call him that), we see them all go to the Statue of Liberty (something to do with it being an island).

At first things go right, but well, since we know that she ends up as a zombie, you can just guess it is going spectacularly wrong.

Sadly, the gore parts were just too disgusting and horrible for me to like. I had such a hard time getting through them. Instead I decided on speedreading though it, as really, my stomach just tried getting rid of all the food that was in there. And thinking back to it my stomach wants to evict some more food now as well.

I do have questions. Did she telepathically post those haikus in her diary? As I can’t imagine her being able to write and run and scream and run. And then later as a zombie, even when she didn’t have fingers, she wrote. So, magic? Or should we just not think about it all.

There are also photographs (which made me wonder how those were added, again, maybe we shouldn’t think about it), bloodsplatters (eventually even turning green), and more. I did quite like that those were added, it made things more exciting.

Oh, and our MC doesn’t just post her own haikus, but also rewrites older ones.

All in all though, I still had fun reading it, but this is definitely not for those of us with a weak stomach. So be warned.