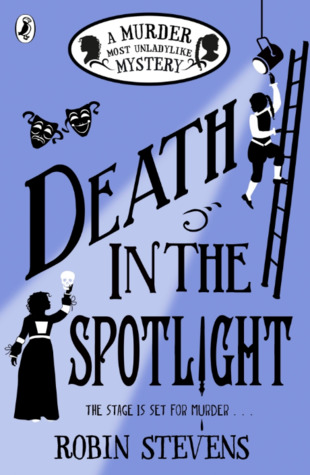 “For never was a story of more woe than this of Juliet and her Romeo.”

Hazel and Daisy are spending some time at Uncle Felix (and Aunt Lucy) after a very exciting few weeks (Hong Kong), and that is how they eventually stumble in the Rue Theatre, in the production of Romeo and Juliet, and from there of course murder just seems to follow them. These girls just can’t escape mystery and murder, even if Hazel can do without the dead bodies. 😛

We had tons and tons of theatre in this one. Daisy and Hazel both have roles. Though Hazel’s is only tiny, but that mostly has to do with the fact that Hazel just doesn’t like standing in the spotlight. Which is exactly like me. It was a delight to see the girls practice their roles, meet the cast, see all the ways the theatre worked, and of course then there are the threats, the murder, and more. Book got more and more exciting as the pages flipped by.

Daisy’s crush on Martita was just the most adorable ever. I wonder if Martita noticed (I am kind of hoping she did).

But this book also was much more important as it featured a coming out of one of our two main characters. Namely Daisy! I was just so delighted to see it happen, I had my suspicions already and was wondering what the author would do with it. Sometimes authors just let these things simmer and nothing happens, but in this one Daisy finally works up the guts to step out of the closet and tell her best friend why she is so eager about Martita. Of course, Hazel and her amazing detective skills (and friend skills) already had a suspicion about it. I loved how they had a chat about it, and how they both became even closer friends now this is all out in the open.

I do say again that Daisy’s attitude is at times quite too much for me. She is still acting like she is better than Hazel, and if Hazel tries to do something else she gets all grumpy about it. Yes, I do see some improvement on the field. She is grudgingly complimenting Hazel, and it seems she is quite proud of her best friend. But there is still tons of room for it. And it would also be nice if Daisy wouldn’t be so eh about Hazel liking boys, or specifically Alexander. You expect her to respect you, but yeah, respect works both ways. Please understand that for once. But I do feel that both girls grew quite a lot with all that happened in this book so I have good hopes for the next books.

Whodunnit? I had tons of suspects, and as the book continued the list dwindled down, but again the author wrote the murderer and the reasons why so well that ending took me by surprise yet again! I just adore it about this series, you are really involved with the girls, you want to solve the mystery, but there are always tiny little bits that don’t click together until the end. It is totally different from so many other mystery books that I read. I often find out the whodunnit way before the ending, and while that is also fun at times, this is tons and tons more fun.

I had such a big laugh when Daisy got sick. Not because I found it funny she was sick, but how she acted throughout it and how she at first all like that she wouldn’t get sick, and then she just dropped on the floor with high fevers.

I loved that we see Alexander and George again. And that they had the chance to help out the girls with the case.

I wasn’t a fan of Lysander. Especially not as the story progressed. He was just a creepy, creepy man with a too big ego and a tendency to go violent.

Yay for Inspector Priestley popping up again, I still love how he treats the girls, how he (mostly) lets them do their detecting and figuring out clues.

Our girls are also learning that growing up isn’t always the most fun thing. For instance while in previous books they could still get away with things, they are now growing up. Which means a whole slew of things. For instance they can’t act like children, they are now often seen as young ladies. Hiding? Isn’t getting easier, especially not for Hazel. I am glad that both are learning other skills. Hazel is learning codes and Daisy is trying out disguises (Hazel’s reactions to them had me laughing).

I hope the next book takes place at Deepdean again, I love that these past books took place elsewhere, but I miss Deepdean, I miss seeing the other girls. Plus I am just a big fan of boarding school stories (especially when combined with mystery and murder).

All in all, a fabulous, exciting book with theatre, friendship, a coming out, and more. I can’t wait for the next book!