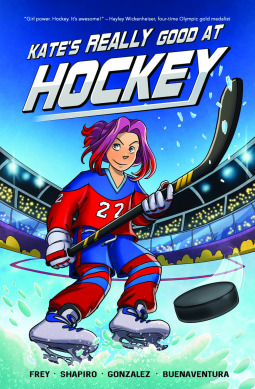 I was quite excited to start this book, I am not really a hockey fan myself, but I do like reading about them. And this one featured a girl for once! Generally the books I see around are about buff guys playing competitive hockey.

Sadly, Kate wasn’t that interesting, and I was often quite annoyed with her attitude. I also thought she was a bit too cocky about her hockey skills. Yes, she was good, but to say she was the best as she often thought she was? No. She has a long way to go. Sorry, it may be harsh, but that is how I feel. And sure, there were also times that I did like her. She was dedicated to hockey, she was quite energetic. And later on she also showed that she was mature.

I also didn’t like the coach of the camp, at least in the beginning/middle. Jocelyn and her sister did quite a few things wrong, not only on the ice but also off it, and she just didn’t give a damn. She got angry at Kate for sure. I hate it when adults just think kids should just toughen up or something else shitty. 😐 And sure, what Kate did wasn’t what one should do, but I can imagine she snapped. I would have done the same. Sorry, there is only so much you can handle before you snap.
Plus I didn’t like how the coach was saying all those things to the kids after practise. I can see why she did it, but I am not sure if it would have worked for everyone.

Jocelyn, and her sister, were just the worst characters. But of course, as always there is redemption. sighs All it takes was a bit of that and voila everyone loves you. rolls her eyes

The camp was fun, or at least seeing what the kids did on the rink. Practise with a puck, without it, goals, shooting, and more.

I also liked how the story was told. I thought it would be told in the now, but actually the now is that Kate is back from camp and telling all her friends at school about it. We sometimes switch back to the now to see the reactions of Kate’s friends.

Grandma and what was going on? I guessed easily on all the secrets. It was just so predictable (and I have seen them pop up in other books as well in the same way). It was still fun to see Kate figure them out, though I wish her mom and grandma would have been more open about it, and told Kate. It would have made several things easier for Kate, but also for the grandma.
Though I did think it was funny at Kate at first was hesitant about going to her grandma, but then later, when certain things come out, she is all about her grandma. I guess that what works on Jocelyn, also works on Kate.

At times there was a whole LOT of text on the page, to the point I had a hard time reading it (the blurriness didn’t work, plus at times it was quite distracting).

The ending was pretty sweet.

Ah, and I quite liked the art! Especially the character designs were topnotch.

But yeah, I just can’t give this book more than 3 stars.