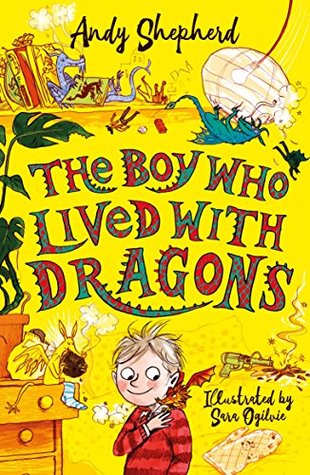 “But strangely the fizzling flowers were not what had my attentions. Because flapping out of the flames was a dragon. And it wasn’t Flicker.”

The dragons (and their humans) are back again in this hilarious, fiery, adventurous story. I was so delighted that this series is continuing (and even more excited now I saw at the end that we will also be getting a third book, coming in January).

The dragons are growing up, and we are seeing them with new skills (like cooking strange combinations). I did feel sorry for Tomas that he was a bit unsure about Flicker. Come on boy, the little guy can change colours, then there is something else, and then there are the dreams (I am at least guessing those are from Flicker). Yes, Flicker is small, but bigger isn’t always better. Sometimes smaller is just the best size. Flicker does fit you very well, you are like a match made in heaven. Just like the other dragons perfectly fit with your friends. I just wish Tomas could feel a bit better about things, not just his dragons, but also about other things. For instance his plans.

Of course, a new dragon appears (do you remember what happened in the previous book, yep, that one is back, including its bullying owner) and trouble arises. I did think it was a bit mean how our MC and his friends went after that dragon. Yes, Liam is treating the dragon wrongly. Yes, he is a prick, but does that qualify you to just try and steal his dragon? No. Again, I understand why they did it, but I am sure there are better ways to go at it.

Liam’s plans, and what was going on with all the huge mess? Well, I had a suspicion very quickly, and after seeing certain scenes my suspicion turned to certainty. I was waiting, quite eagerly even, to see how long it would take Tomas and his friends to also figure it out. And then there was the big confrontation and I was just gasping, because, yes I did see it coming, but it was still a shock that he would be that evil.

The tree, you know the dragon fruit tree, is also not doing so well. Poor thing. I did love that Tomas tried everything he could to help out the tree. I did think it was quite magical he didn’t notice THAT though, given how thorough he was while watering. 😛

This one also deals with some other trouble than the dragons. Namely grandpa problems. Tomas has been keeping tons of secrets from his grandfather, and it is breaking up their relationship. Grandpa has a suspicion that Tomas (and his friends) are up to something, and that it has to do with the tree in his garden, but Tomas isn’t telling anything. And on top of that he is also being so busy that he doesn’t have a lot of time to be with his grandpa. I was quite sad throughout the book as things did turn quite sad, but thankfully the ending made everything all the better. Though I guess a new problem arises now, tough decisions have to be made.

I also had so much laughs when Lolli popped up in the story. Making a mess in the living room (because she wants an egg, the egg thing is also once again illustrated on the last page which made me smile), glaring at Liam when he is being rude.

I really enjoyed this book, and I guess the next one will be about the summer, and the tough decisions that need to be made. I wonder how the author will write it all.

And I can’t forget the wonderful illustrations by the fabulous Sara Ogilvie!

I just flew through this book, it is just too much fun. Dragons, hidden dragon dens, food, giant vegetables, friendship, grandparents, hilarious situations (Crystal please don’t try to hatch eggs that aren’t yours), and more! I would highly recommend it to everyone.