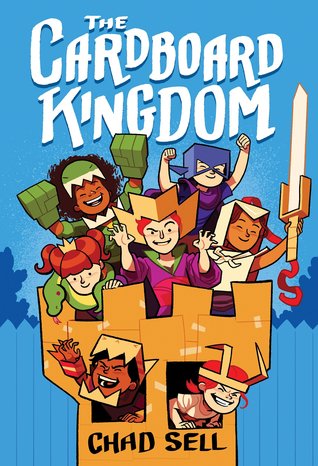 A neighbourhood of kids, big adventures, tons of imagination and cardboard.

I am just so delighted I finally had the chance to buy this one and then read it. Now that I read it I can just say that I loved it. How it is all adventure, all imagination, but also discusses real issues. For instance Seth, aka The Gargoyle, whose parents are divorcing (his dad is apparently cheating on his mom). Or Roy who is kind of a dick until you find out why (though it still doesn’t excuse his crummy behaviour from the past stories). Each girl or boy has a story, and I just adored getting to meet all of them and getting to know them better. To see what kind of creature or fantasy person they would become. From gargoyles to banshees to sorceresses to beasts.

We eventually even had an evil faction with kids who preferred to be a bit more evil. Which made everything even more interesting, and also a bit more hilarious. I am glad the other kids also accepted these kids and that they had quite a few interesting battles and scenarios.

These kids were so creative with their cardboard boxes, and with using their surroundings. I just loved reading about the stories they created, the adventures they had. Or how they could quickly form a big monster to defeat a villain.

Plus everything just connected so beautifully. I was a bit worried as we have so many characters, but I shouldn’t have worried.

I loved the illustrations between the stories, they were just so much fun.

I just have two characters I didn’t quite like, though later on there was only one of them left. Roy was one of them, he was just terrible. But after his story I just liked him more. Again, I am not excusing him from what he did, but I can imagine why he was so mean. Then there is Alice. I just didn’t like her and how she was just way to hyperfocussed on her work (first lemonade than something else). I felt she was quite rude and mean at times, going way overboard.

Thanks to the author(s) for adding a map at the beginning with each of the houses. And also pictures of all the kids, though I wish that one also had their names.

All in all, I just had so much fun reading this book, and I would recommend it to all.