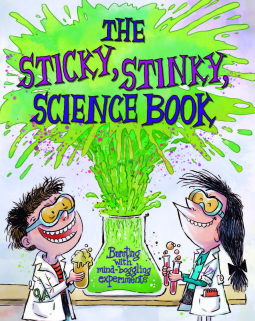 I just LOVE books about science experiments, especially those aimed at kids. I have found some very fun experiments while reading books like this, so of course I couldn’t resist this one. Plus, just look at that cover! It is just so much fun. Two kids having the best of times with an exploding experiment (warning kids, don’t do this at home :P).

And the introduction immediately sets a fun tone for the book with: “In this book, scence gets down and dirty. You’re about to dive into a world where things are STICKY; where they’re STINKY; where they are just plain messy, yucky, and disgusting. IN other words, where science is much more fun that you’d think. But guess what? Here’s the really cool part: IT’S STILL SCIENCE.”

Of course, like many other books, this one starts with slime (two times even). I was rolling my eyes at that, but slime has been a trend for a year or so now. Just like it was a trend when I was a kid. You just can’t flee from slime. But I guess I still liked it as it was going further on how slime, and later oobleck, works.

And that is how it is with each experiment. We get told what to do, and what to do in case it doesn’t work, in simple steps, and then it explains the science behind it and gives us some examples (like the bendy bone one that gave us some sharks because of their bendy skeletons).

My favourite experiment? Let’s see: Lemon Volcano! I really have to try that one myself soon.

I only skipped one, the Mould Farm. My stomach just isn’t the happiest already, and mould is just a big no no for me now.

At the end there are links to websites and a science lingo page. Definitely like that these two are added.

The book is also wonderfully illustrated with illustrations that fit the hilarious (and icky, sticky, stinky) science experiments that this book contains.

All in all, tons of fun, and I am sure kids will love this book.