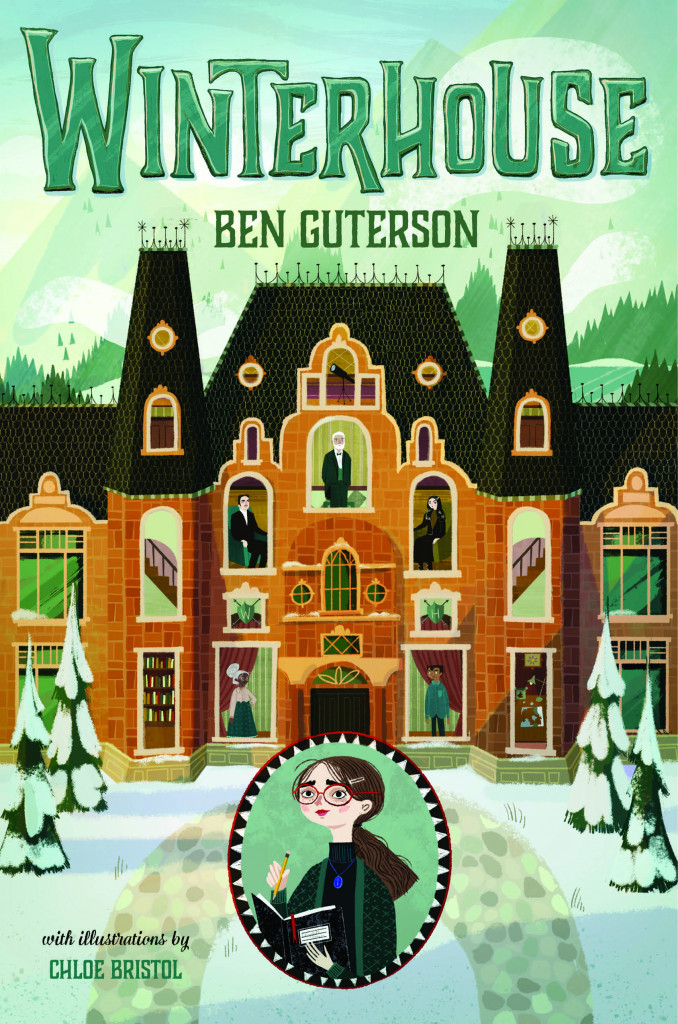 Welcome to Winterhouse, a magical hotel filled with tons of puzzles, snow, stories, and more.

I am kind of fuzzy in my head, because of me being sick, but I do want to write a review for this one now.

Elizabeth isn’t having the best of lives as she lives with her aunt and uncle who don’t really seem to be happy she is around, but then she gets the chance to spend the holidays at a very special hotel, Winterhouse. At first she is worried, but quite soon she falls in love with the place, with the people, and as the magic and mystery grows she gets more and more excited about it. And quite soon she just doesn’t want to go.

Of course, I had a good idea why she was invited, what connected her to Winterhouse, and as the story continued I knew it with more and more certainty. Come on, there are hints everywhere, starting with her name.

I just adored Winterhouse, and I want to go there instantly. Stay there with my fiance. Ski, swim, read all the books in the library (maybe I find a magical book myself), puzzle, sleep, get cosy at the fireplaces. And then there is Christmas and New Years, both events that seemed so so magical. I want to be there for those events. See the magical snow, see fireworks. Ah dreams.

The special candy everyone was raving about? Eh, it did sound OK, if there weren’t any nuts in it. For now, avoid. Definitely. Don’t want to die on my vacation.

The mystery was just a delight, the puzzles were so much fun to solve and figure out.

Freddy was one of the least favourite characters of mine. How would I say it.. um, I just didn’t like how he was eh about Elizabeth’s reading. He kept making comments, or telling her that it wasn’t a story when she was telling him about magical things happening. I hate people who do that. I really do. I have heard my share of crap from people who think I read too much, or whatever. Just leave us readers alone. We aren’t making comments about the fact you are working on gluing together some walnuts to make logs and that you prefer that over anything else. 😐 Plus he just lacked so much enthusiasm. If I was Freddy, and someone told me about all the stuff happening? Hell, I would be so enthusiastic I would bounce 24/7. I would be in for everything. And sure, I would also work on my project. I understand that Freddy is not me, but yeah, he was a disappointment. He did have some nice qualities, but in overall eh.

The book is also delightfully illustrated. I was looking forward to seeing them pop up, wondering what would be shown on them this time. What scene would we see? What item? Who would we see?

The ending was just exciting, exciting, and super exciting! I am so happy with how everything ended, congrats Elizabeth. Her life suddenly got a ton more fun, or well, she got something to look forward to now.

All in all, I definitely need the second book, now it is just waiting for it to come out in paperback. Next year, hopefully.

I would also recommend this book to everyone looking for a great book perfect for the winter/Christmas season which is filled with fun puzzles en magic.