Welcome to the Blog Tour for Flying Mutant Zombie Rats by Kat de Falla. Yep, not only are these rats zombies, but they are also flying mutants. Welp, I suddenly don’t think rats are cute. 😛

For today’s tour I will tell you all about the book and the author, I got a Chapter 1 excerpt, and oh yes, you can win a prize in the giveaway.

Ready? Get set! Run, run away from mutant rats! 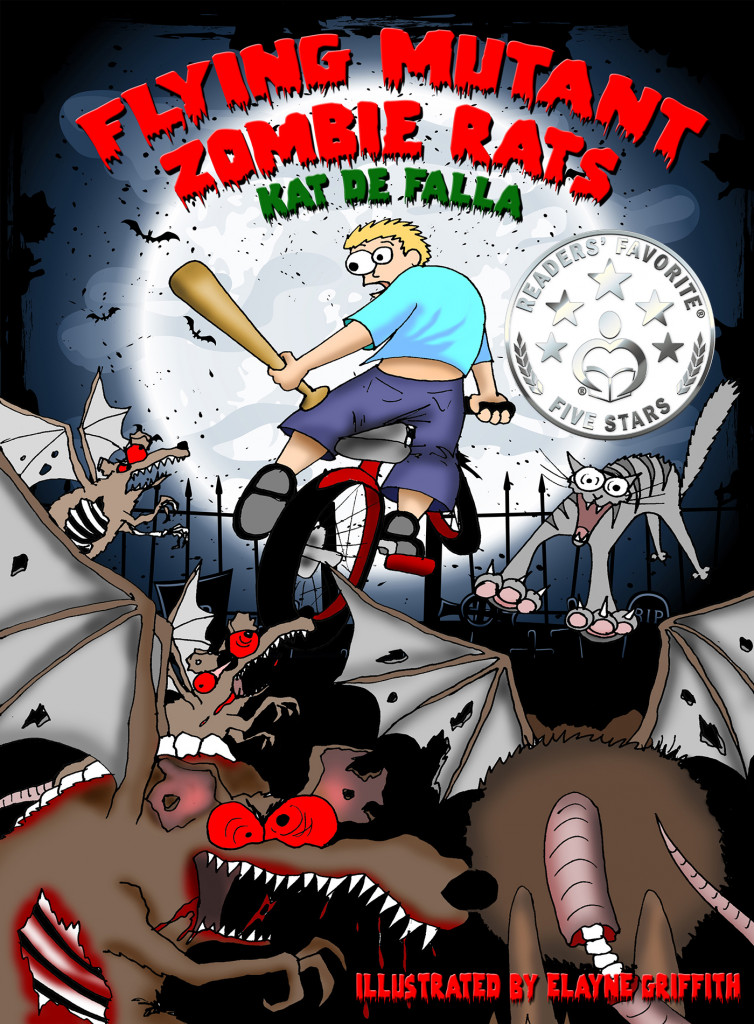 Summer vacation is almost here! And Pea O’Neil is stoked to try out the new local BMX track which is finally open. He and his gang of friends can ride all summer long!

But when Pea tries a back flip, he unwittingly opens a portal to another dimension and hordes of flying mutant zombie rats are unleashed upon the city. With the help of an otherworldly talking cat sent to help prevent the demise of humankind, Pea and his friends must hunt down the hungry mutants and send them back before the portal closes.

But when the zombie rats attack a neighbor man, the boys have to enlist the help of a graveyard looney and the city’s stray cats. With time running out, Pea and his gang track the monsters to the city’s sewer system. But in the city sewer of Milwaukee, Wisconsin, it’s eat…or get eaten.

Kat was born and raised in Milwaukee, Wisconsin where she learned to roller skate, ride a banana seat bike, and love Shakespeare. She holds a Doctor of Pharmacy degree and is happily employed as a retail pharmacist. She is married to her soul mate, composer Lee de Falla and raising four kids together ala the Brady Bunch. The Seer’s Lover was Kat’s first book and she is working feverishly on four different series at the moment!
Register for her newsletter to learn about her upcoming projects and find out about deals and giveaways at http://eepurl.com/MFZ55
Kat is so much an extravert that she has come full circle and enjoys her alone time as much as her social adventures. Connect with Kat (who does indeed love cats!)

“Peabody Cleveland O’Neal the Third, you turn out that light right now! No matter how much you wish otherwise, it is still a school night.”

He groaned, but did what his mom asked. He hated when she—or anyone else, really—used his full name. Didn’t his dad or his grandpa realize how much the name sucked before saddling him with it too? It was bad enough everyone called him “Pea,” although even that was better than “Peabody.”

Pea tried to go to sleep. He really did. But nothing worked. Not even counting sheep. His mom was right—it was a school night. Even better, tomorrow was the last day of school before summer vacation.

But as he tossed in his bed, staring at his ceiling fan, he couldn’t make that matter. He couldn’t wait one more second for daylight. He wanted school and his paper route to be over so he
could be out racing his BMX bike!

He tried kicking off his blankets, then pulling them back on. Nothing worked. When the clock read 3:38 a.m. he gave up and decided to risk sneaking out.

Just a peek. A quick drive-by. Maybe it would calm him down before the big event tomorrow afternoon: the opening of his very own neighborhood BMX bike track, designed by none other than Moto
Maddie, the local hero. His PJs and high-tops would suffice for the jaunt.

He wrenched up his bedroom window and hopped into the bush that cushioned his landing on all his late-night escapades. Hoping his dad had forgotten to lock the garage again, he tiptoed past his mother’s roses. He crouched low as he passed under his parents’ bedroom window, timing his steps with his dad’s chainsaw snoring. So far so good. Past the pear tree. Around the ratty swing set. He twisted the garage doorknob with a sweaty palm. It turned. He slipped inside with a sigh of relief.

There she was. His trusty Redline bike with white frame and red and black lettering. He wheeled her into the alley and was off.

The residents of his neighborhood were out cold. Even the next-door neighbor, the notorious night owl Mr. Avalon, was sprawled on the couch, sound asleep despite his bright living room lights and the television still flashing images.

An unusual early June heat wave made the night air muggy and thick. He was grateful for the breeze he created as he zipped down sidewalks and through dark alleys. Finally he eased to a stop inside the tree line of the park, where a small, newly painted sign hung on a chain-link fence:

Dedicated to all those with no fear and a desire for speed.

Ride at your own risk.

A risk Pea was ready to take every day.

Moto Maddie was a local girl, a diva of sorts to the BMX community. And she was beyond good. She’d hit the big time—got sponsored by a local business at fifteen, which led to a major sponsor at seventeen. Pea and his friends watched in awe when she raced at the State Fair Park the summer before she went away to college. She’d vowed to give back to the community that had supported her. She was true to her word. Her uncle owned a construction business and her dad owned this little chunk of vacant land. Moto Maddie drew up the plans herself. To Pea and his friends, she was now an official local legend.

Lightning zapped behind ominous clouds. But no rain.

Pea leaned his bike behind a tree on the sidewalk, then hopped the fence with ease.

The new dirt track took his breath away. It was a mesh of all things BMXers could wish for—a sweet half-pipe built right into the racetrack! The crazy-high berms tucked at the two sharpest turns would have him riding almost parallel to the ground. There was even a professional-style starting gate. Plus, the track was way bigger than it looked from the outside.

The track probably looked like a junkyard without junk to adults. Good, maybe they’d stay away—because to BMX kids, this was heaven. He couldn’t resist walking along the middle of the dirt track, imagining each jump, corner, and trick he and his friends would practice all summer.

The lightning came fast now and he counted the seconds until the thunder followed. The storm was getting close. Just a few more minutes.

Bang! Pop! A bolt of light extended from the sky and slammed into the bushes in front of him, throwing him backward. Wisps of smoke trailed up from charred branches.

Pea’s heart thumped. He glued his eyes on the bush. Was someone in there?

Bright flashes of yellow-green light sparked from inside the crackling bushes like a science experiment gone wrong. Squinting, he watched for movement. Did a squirrel get struck by lightning?

“Is anyone there?” he called.

A huge flash blinded him for a second. The branches rustled and cracked as the air itself…changed. The air rippled. Everything looked wavy, like a stone dropped in a calm lake. Then in a blink, everything went back to normal.

Or not. The branches lurched back and forth again, worse than before, as if someone or something was trying to get out. Pea braced himself for an angry raccoon or a possum. He picked up a stick, brandishing it like a weapon. “You coming out?” he asked. Fear was not in his repertoire. He’d inherited that from his dad. When his friends ran away, Pea was usually the one to stay put or take a step forward.

Once more, the leaves and shrubs shook, but this time a flying ball of fur hurtled toward him. He took a swing at it and missed.

Whatever it was, maybe it hadn’t come out voluntarily.

Pea whirled around only to realize it was a tabby cat. And like a cat, it landed on all fours facing Pea. He lowered his stick. The cat’s hair stood on end and its tail was a blur of angry fur. It was brown and black with white on its chest and part of its left ear was missing, as if it had been ripped off. Stranger still, its eyes glowed a bright electric blue.

The cat looked as startled to see Pea as Pea was to see it.

“You win the fight in there, tomcat?” Pea jerked a thumb toward the shrubs. At least this explained all the noise. But what about that weird ripple in the air? And the colors?

The cat cocked his head and gave Pea that Oh, you’re only a dumb human look cats pull off so well. Yet, something about this cat was different. Pea couldn’t put his finger on it.

Cops. Chasing someone, or checking out a report of a lightning strike? Either way, Pea’s bike wasn’t totally hidden and kids tooling around the inner city of Milwaukee in their PJs in the middle of the night weren’t looked upon too kindly. Time to scram.

“Later, Tom. Hope you catch Jerry.” He jogged to the fence then stopped, looking back for the cat. The animal had vanished. And the bushes were quiet.

He hopped the fence, sped home, parked his bike, and snuck back into his house in record time. Right before the rain came down in buckets.

Images swirled in Pea’s mind before he fell into a fitful sleep: lightning strikes, the BMX track, rippling air, the tomcat with blue eyes.

Pea woke up to the glaring light of the eastern sun.

The tomcat sat perched in his open bedroom window. Like he’d been waiting there all night.