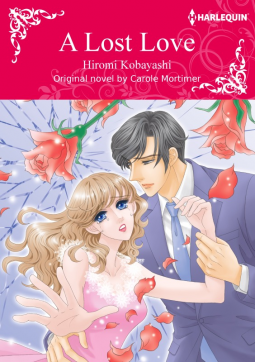 Yep, the Harlequin Manga party continues! I still got several more to read, so be prepared. This one features accidents, plastic surgery, and revenge on a bad husband (though I am sure it will all turn hunkydory in the end). The cover is also an improvement of the last Harlequin I read (big ass hands), though it does look a bit overly dramatic.

I am sorry, but I did think it was a bit funny (oh this sounds so wrong) that she was all covered up, but that her mouth, her hair, her eyes (and her fingers) were all still glittery and shiny and beautiful. It just didn’t fit with the rest of the picture. Also is it terrible to say that I much more prefer her as Jacqui than Brooke? But later it seems that her red hair isn’t her natural colour, darn it. I had kind of hopes we had a cute redhead as MC.

And the drama starts right from the start, we meet Brooke while she is visiting a dying relative (I would call her that given her relationship to her), of course her dear ex-husband is also there, and oh my. Ah yes, the classic, follow the girl who has zero interest in you move (which he keeps doing for a few more times). Classic. So classic. Though he should know that dissing your wife is not classy, even if Brooke wasn’t your wife than it is still a bit eh to keep talking about your wife to another woman. Wow, I just got an headache from writing that sentence. 😛 At first I was confused as I am sure my hubby would recognise me by my voice even if I didn’t look like me, but during a flashback it is explained that she went all the way for her change to Brooke. Wow, go girl.

“I wonder how he would react if I told him the truth now. The woman in front of you actually is that wife of yours.” Ohhh, I would love it if you did that. But there is still some time left for the story to unfold. Given that she is now in the cottage (and has to be there or else) it will get interesting soon.

We also finally get a flashback, I was wondering how these two met up and how it all turned out very wrong. Sorry, I am not a fan of this guy. Controlling? Yep. He just threw out all her clothes because he wants her to wear stuff that fits their richness more without even asking if she wanted that. Then he wants a child, which she delivers, and then that dude got more and more controlling and I just was getting so angry at everything. He is keeping her away from her baby, her friends, her job, her life. And then when she tries to take back control poop really hits the fan. Dang, can someone kick this guy for me? What a terrible dickwad.

Urgghhh, I am only halfway through these and I just can’t imagine ever liking this guy. Their kid just walked into the cottage, on his own, and then the dude barges in and thinks that Brooke stole the kid? Lol whut? Dude. Attitude check please.

Though I did like that, as Brooke, she was able to get closer to the family and to her ex. She learned some new things about everyone, and while I still don’t like the dude, he does seem to have some problems. I wish he had just talked with his wife about it instead of going by rumours. Girls can still have guy friends you know.

OMG, I am crying. I didn’t think I would cry for this two, or at least not their romance, but OMG I am now crying. Yep, tons of crying. The story was a bit overly dramatic, I didn’t think I would like the guy (thinking now, I still don’t quite like him), but that ending, it is just too perfect. A bit cliche of course, but still. cries

The art was pretty nicely done, though the kid looked weird, and what is up with their noses?

Still, I am happy I read this story, it wasn’t even too bad, I loved our MC. And again, that ending!