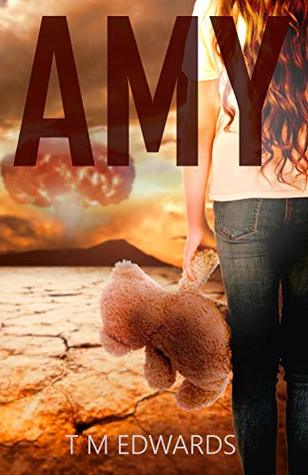 “Teddy, Mom says I have to be very quiet when the zombies come.
But sometimes I really want to scream.”

The first of the two Tales of Courage From Beyond The Apocalypse! This one featuring a protagonist we don’t often see in apocalypse/zombie stories, namely a kid. A 6-year old girl named Amy.

When this story starts the apocalypse has already begun, apparently sick people (aka zombies) have been spotted around the country. The book begins when the government throws an atomic bomb on one of the most infected cities. Yep, an atomic bomb. Like why just burn it to the ground when you can destroy everyone (and everything) in a wide radius as well? Those survivors are now screwed even further, which is also what we see in this book. There is no sun due to the clouds covering it, it is cold, and several other things.

In the story we switches back between stuff told to Amy’s favourite toy, a teddy bear and from Amy’s POV as things happen around her. Hope I explained that one correctly. I wasn’t that big of a fan of her talking to her Teddy. I get that she is 6 + everything is scary and her bear is her confidante, but still I just couldn’t like those parts.

At times I also got annoyed with Amy (I don’t think survivors are going to care that you peed your pants and couldn’t get it clean, and your parents are doing their best, no need to keep going on and on about the same things), but I could forgive her as she is 6-years old + living in a zombie world.

I loved that her parents did the best they could to explain to Amy what was going on, I could also understand them getting slightly annoyed with her as she is a liability. The dad was pretty awesome, though did make some stupid decisions. But I guess anyone would do those if their family/loved ones were threatened.

The ending was really exciting and also very sweet. I was cheering when Thelma showed up. When I was reading this one I hadn’t read the Thelma book yet, but I loved her just from the blurb.

All in all, a very unique short story about the zombie apocalypse. I am glad that the author didn’t go for the standard zombie survivor. I would recommend it.