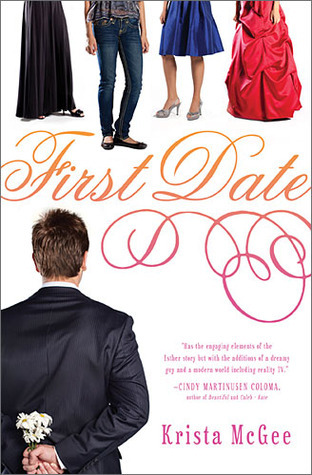 Warning, due to things, this review may get a bit long. I just need to express some close to me feelings.

I was again in the reality show mood, and I came across this one, I was all curious about it and immediately went to read it. Meet Addy, a Christian girl who would rather study and read than go and vie for a cute guy who is also the son of the president. I just adored how Addy stayed close to who she was, though I think it would be a good idea for her to not get angry at people when she is uncomfortable. It is hurting people around her. Thankfully, Kara, her new best friend, sees through it all and from that point isn’t that much daunted by Addy’s grumpiness.

I loved the reality show (the name was so sweet: The Book of Love), the idea of 100 (well, 30) girls competing for a prom date with a cute guy was really adorable. There are also contests, dates, talks, even a talent show (go go Addy). The only thing I didn’t like were the girls, the other contestants. 🙁 They were so mean. I was just hurting for Addy, that she had to go through that instead of maybe enjoying the show for once.

It was great fun to see how Addy was embraced by everyone in America. Everyone was rooting for her. At times it get a bit hilarious that she was so popular for doing the things she did, as the other girls didn’t seem to get that much attention, but I still really liked it. And I couldn’t wait to see what America had to say about each step that Addy made in the program.

Jonathon and Addy’s relationship? One word: ADORABLE. More words, I just adored the click these two had, the conversations that finally happened (as soon as she loosened up a bit), the cute moments they shared (like the golf date). They just matched so well, and I was shipping them like crazy.

Our girl is Christian, so I thought I would be able to relate to her. Sadly, I barely did. There are moments that I could connect with her, like how she talks to God in her head, how she tries to be honest and caring and sweet (though she did judge people at times which didn’t make me a very happy person). But then there are other times I just couldn’t connect at all. For one that she is afraid that people know she is Christian. I just don’t understand why this is so scary? I haven’t had one experience in life that was bad, I have worn my cross necklace for years and no comments or scary experiences. Then there was the whole that she wants to get people to believe in God, though eventually she sees in that people need to also be let in their own values. People aren’t projects. I am glad she eventually saw that, though she was a bit preachy at times. Sorry, if someone wants to know about Christianity/my feelings on the topic/God, I would gladly tell them, but other than that, I leave people alone. If someone isn’t a believer, good for them. If they believe in another God, good for them.
Lastly, something that struck me as odd, at least at first. Her uncle was talking about heartbreak if the boy wasn’t that. I wasn’t sure what was meant with that at first, but later we find out that apparently Addy can’t have a relationship with someone who isn’t Christian. So even if she were to fall for Jonathan, if he wasn’t Christian he was out. Wow. That just goes too far for me. I can’t imagine being restricted that way. Religion is important to me, but as long as my lover respects my believes I am already happy enough. In 6 months I am about to marry a wonderful, sweet and respectful guy who doesn’t believe at all. We have been together for almost 10 years now, and he makes me very happy. He has no interest in religion, and I am OK with that. He respects my believes, just like I respect that he is a non-believer.

The journal parts? Sorry, I skimmed over them, I just wasn’t at all interested in them. I tried a few but I just struggled so much and it took me out of the book.

Hank, please. Please, you cannot do all you did against a 17-year old teen. He was a terrible man, and I was just wondering how long it would take for someone to do anything about it (hint, doesn’t happen sadly). He never listened to Addy, didn’t care about her, just got angry at her for doing things she didn’t even do or plan.

The ending made me happy, I am glad the author ended the reality show on that note. Plus, eeep at the last few pages, I was just giggling in happiness.

All in all, this was a good read. I couldn’t stop reading it until the book was over. I would recommend it, though maybe the God/Christian parts may get too much for people who aren’t religious.