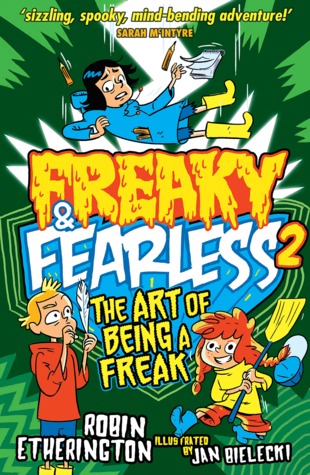 “The day a budgie gets the better of me is the day I quit hunting monsters,’ said Lucy with determination.

The last of 2018’s Boekenfestijn book. It took me a bit to read this one as I was worried I may not get the story due to this being book 2 of a series. But then I finally mustered up the courage, started reading and didn’t want to stop at all. I had no problems whatsoever with reading this book first. There are explanations here and there, and I could easily get the gist on what was going on. I was utterly lost in this amazingly fun adventure featuring three brave kids. Simon, Whippet, and Lucy.

The mystery starts immediately from the start. What is up with this town? A plane’s wing for sign? A shopkeeper who dresses up as a pirate captain and may actually be one? A big caveman like guy who is probably a caveman? Then there is Snotticus from the previous book who is apparently one big icky monster with a giant snotty nose.

I do have to say that I am glad that Simon is the MC, because if it was Whippet… I would have stopped reading. Sorry, Whippet was just Whippet. Boring, bland, and while I did love his drawing and the power he had, that just didn’t make up for all his other weird behaviour. He loves conspiracy theories, and while sure, entertain me with them, I am not a fan.

Simon however was a great character, and I was curious about his power. Apparently, in the previous story, he has shown he can hypnotise monsters by story. Which is totally awesome, so I kept hoping he would show his talent. But apparently he needs a certain trigger to make it happen.
He is just so normal, and I loved that. Plus he was a good friend to Whippet, helping him out, talking to him, and apparently not being that impressed with his silly theories. Of course, I was at times confused as he also has a nickname, Mossy. At times he is Mossy then he is Simon. I guess if I had read the first book I wouldn’t be so confused, or maybe I would. I guess we will find out if I ever get my hands on the first (and the third) book in this series.

The boys are off to adventure camp, which sounds absolutely delightful. I would have signed up in a heartbeat. Though the sight of the camp… oh boy. I did like that Mr. Recks allowed the kids to fix things themselves (and the girls rule).
I loved that there were the standard things you see in camping. The food, the campfire stories, the weather not always being the kindest, trips to the forest, games. Ah, I wanted to be there.

But, just as the last book, we have a monster. Something is flying around, causing chaos and mayhem and zapping everything left and right. Our boys (and their friend) are on the case and ready to find out what the monster is. Before it destroys everything.

Who the mysterious boy was? Eh, I knew it from the start. Mainly because the cover spoils that, but also because, even though I only have known that person from recollections of the boys, it was just all too coincidental that that person would just be there at that moment when there is a monster around. Still it was fun to see the boys discover it, and then the mysterious boy’s reaction to them discovering it. 😛

There is lots of humour in this book and I frequently was laughing very loudly (sorry to my fiance). Not only that there is enough adventure and mystery to keep my hanging on to each page. I had to know what the monster was, and also why it was popping up in the Fearless/Freaky comics.

I did feel kind of sorry for the monster. That poor thing. 🙁

The ending? Oh boy, now I definitely need the next book in this series. I want to know more about those mysterious guys, about Lucy, and what our two boys can do.

The book is also illustrated and I just adored the style of drawings! Plus, I loved that some pages were lined on the borders with illustrations. Like when our duo goes into that T-rex and the pages have borders featuring boxes, our duo climbing things, and them going into a very foreboding entrance. Sometimes books just have some illustrations here and there, but in this one it goes all the way.

All in all, a very exciting book and I had tons and tons of fun reading it. I am so happy that I, despite this being a book 2, brought the book with me when I spotted it at Boekenfestijn this year. I hope to find the other 2 books next year at a Boekenfestijn and otherwise I will be buying them on Amazon. I need more of these in my life.