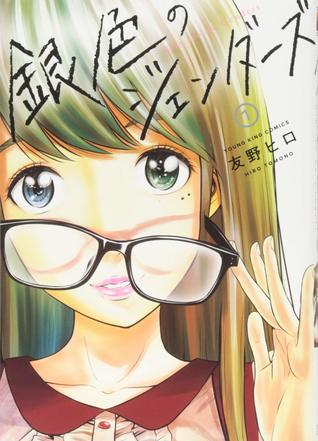 A manga about crossdressing, exploring your gender, about secrets, and more.

Meet Gin, a guy who loves to crossdress and who feels way more comfortable wearing girl clothes and make-up than he does when he is a guy. I loved how wonderful he was with all of it. His shaves his legs, gets good quality wigs, knows how to work make-up (I believe he may even be better than I at it all), he also has the build for it (he is small and slim). Really, as soon as he changes into a dress/girl outfit, adds some make-up, the wig, it is like there is a whole different person. And he looks so adorable as girl. His pictures (he posts selfies on Twitter/Social Media) were just so cute and perfection.
But he has to learn some things, for instance to not spread your legs if you are wearing a skirt. Or, when drunk, not to go into the men’s bathroom (though thankfully people thought he was just too drunk to go to the right toilet). Eventually he goes out more and more as a girl, but he still calls himself Boku. Which causes some confusion with people. And makes me happy that we don’t have such gender-specific I’s in Dutch or English.

I loved that throughout the book he finds people who care about him (though so far only one of them knows that he is crossdressing and thus a guy), and that he learns that he isn’t the only one hiding something. I loved it even more that he got more and more comfortable about crossdressing, and that he also found out more about his gender and sexuality. That it isn’t strange that he likes to be a girl. That it is OK. You could just see the relief flow through him each time he found out that it was totally OK to do what he wanted to do. I loved seeing him crossdress and just feel fabulous that people loved how he looked. The first time that he crossdressed outside he was worried and shy, but eventually he grew confident.

However, the first time he crossdressed he was almost turned away from it, due to a horrible event happening to him, and if it weren’t for a girl who saved him he would probably holed up in his home forever. What happens? Attempted rape. 😐

I did feel uncomfortable about the deal Gin made with that blond girl who saved him. She is willing to help him with his make-up HOWEVER he needs to flirt with the sexy (vice)-president and have that guy fall for him (as a girl). Sorry, but that is just sketchy and creepy and feels bad to me. Not only for Gin, but also for the guy. Come on.

I am kind of wondering how long it will take people to find out about his secret, since he is given his real name when people ask about it. I can only imagine that it won’t take long before people look him up or search for him and find it out. Unless Gin stays into his girl-mode for all time, but so far he is still switching between them.

The art is just gorgeous, just look at that cover, that is a very good indication of the rest of the art in the book.

I can’t wait to see what more secrets people have, I want to see Gin get more comfortable (and learn more about make-up and clothes), and I hope that when people find out that hell isn’t going to break out for Gin. 🙁

I would highly recommend this manga.