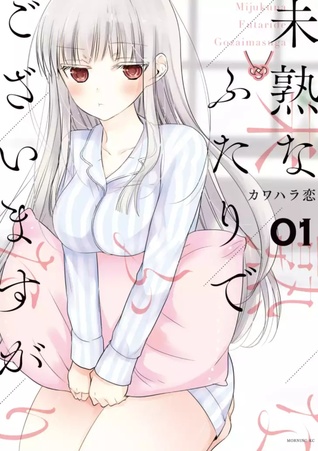 A newlywed couple is trying to have sex, but having no luck with it due to various reasons, mostly to do with their own inexperience.

I have to say that at first this was quite adorable, a newlywedded couple who wants to have sex, yet don’t know how to. But eventually it just got hilariously dumb. For instance, why the hell are these two together? At first I thought this was an arranged marriage, which would explain the awkwardness between the characters, but then we find out these two have been pining for each other for quite some time (from childhood even). So why are they so awkward around each other, it is like they haven’t dated at all, haven’t done anything but just marry right of the bat and started living together. Whut?

Come on, it was just so unbelievable. She doesn’t get her own feelings, just kills the mood as soon as her hubby gets into the mood. Either by telling him to wear his glasses, because apparently without he is too sexy for her to handle (she gets way too excited apparently), which is kind of the point when you have sex… rolls eyes, telling him that it is too awkward, etc. etc. And then there is the guy himself. Apparently he can’t get it up for his wife (as that is what seemingly happened during their honeymoon and maybe even hinted at in other parts). These two get embarrassed walking around naked for their partners, well at least the girl does at times. There is one sexy bathroom scene, and our girl chickened out, and then (stupidly) opened the normal cold water tap of the shower. Moment ruined. Again. sighs

The only reason why I kept reading on was because I kind of hoped for at least some sexy times. It didn’t have to be sex sex, but some touching and some romantic stuff? But I didn’t really get anything of that at all. Or well, we did get some little bits of it, but again all ruined by their bumbling idiocy.

The art was pretty nicely done.

But all in all, not going to continue. Maybe if the series is over I will check it out again, just to see if these two get some chemistry and have sex.