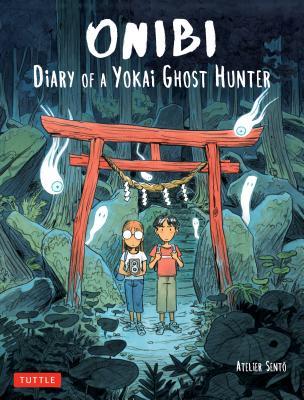 Come with Cécile and Olivier as they travel through Japan, finding hidden spots that may have Youkai!

I was super-excited about this book. Japan is on a shared number 1 (along with Venice and Egypt) spot of places I want to go to really badly. So naturally I had to have this book which combined travelling through Japan and finding + photographing Youkai.

The book is separated in parts, namely a prologue and then for each Youkai picture. I really loved that they went for this format, now each photograph got the attention it deserved, plus it wasn’t chaos of figuring out where what photograph belonged to again (which it would have been if it was just one big continuous story).

Our duo wasn’t even planning to go hunting for Youkai but they get (or I should say Cécile got) a very special camera that apparently allows the user to make pictures of Youkai. I loved that while Olivier was a bit shocked at that Cécile bought that camera, he was all the more eager to help out with finding Youkai. 😛

In each part they go to a certain part of Japan and I just adored seeing forests, shrines, mascots, parades, seasides, eventually heading to the place where the camera was created (and with it apparently others). I also can’t forget the food, we also get plenty of yummy food that made (and makes as I still need to eat breakfast as I type this) my tummy rumble.

I have to say I expected a bit of twist regarding the owners of Margutta. The way our duo talked about them made it seem like they are some kind of magical beings that lured people to their place. So I was more than prepared for them to appear as Youkai when/if Cécile was going to take a picture. But they were just humans who cared deeply about others and made people feel comfortable and happy, thus having them stay.

I loved the extra bits, like the instruction for the camera (and how to photograph Youkai) and the how to get Youkai out of a film (as they don’t just show up instantly).

The ending was OK, I am glad that we got that final shot, even though it was just a dream-sequence. I guess the Youkai also wanted to say goodbye to our duo.

The art was fabulous, it was the third thing that drew me to the book. That cover was just amazing, but I can tell you that the inside is just as gorgeous and pretty.At times I was just staring at a page for a bit longer than normal, just because it was so nicely drawn with tiny little details.

All in all, a fantastic book that I would highly recommend. I could probably talk about it for a bit longer, but I don’t want to make my review too long.