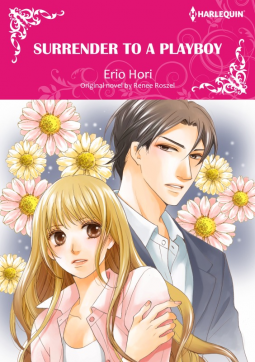 I just adore this cover, and then especially the guy on it. He looks quite swoony. Though I am a bit worried about the playboy part of the manga, and I am also kind of wondering how much drama will be in this one. Considering that guy didn’t respond to our MC’s letters, and she is furious with him, but also attracted to him, I can just imagine the drama.

Ah, and the drama already starts from the start, as our Bonner isn’t the Bonner. Yep, this dude is posing as his best friend who did some criminal stuff and can’t leave the city. Oh dear. Doing that to an older lady? How could you. That is such a dick move. Just tell your friend no. sighs

I did like that we see both of our MCs, sometimes the guys get a small bit of text or a few pages, but it seems we get equal amounts from both in this one. I am happy as otherwise the story wouldn’t have worked.

Oh, ef no. No, just no. NOPE. You don’t push a woman who just rejected you against the wall and forcibly kiss her and hold her. NOPE.

Wow, that lawyer lady needs to understand that she can’t just barge into her ex’s life like that. It is over, how many times does he need to tell her that? I really don’t like woman who push like this. Plus she was just way too rude towards Mary.

I knew instantly what had happened when Becca disappeared and “Bonner” got that look on his face. And yes, I cried. As soon there is just the sweetest scene that made me sigh in relief and cry in happiness.

And finally, FINALLY, the truth comes out. And not in the best ways. But eh, at least it is finally out. I do wonder why grandma never noticed? I know she is old, but it seemed she could still see pretty OK, so how did she not notice her grandson looking like a totally different person?

The ending was so sweet though, and I am happy with it, though I did think it was a bit rushed. For one while I did see the attraction between them, tons of things were based on a lie, and that is just not a very good foundation for a relationship.

The art? I quite liked the style, it was cute. “Bonner” was very swoony, and I also liked the designs of the other characters.

All in all, still a pretty decent manga/story, I did have fun reading it.

2 thoughts on “Review for Surrender to a Playboy: Harlequin Manga”