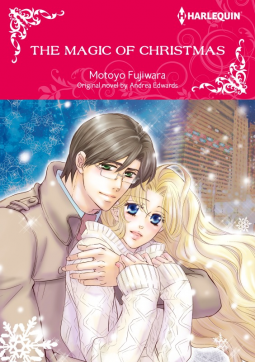 I received this one from Netgalley in exchange of an honest review!

So, the last Harlequin Manga. I am finally through my whole pile of it. I could have finished a week or so ago, but decided to spread them all out when I got them, and this one I wanted to save until it was almost Christmas.

And this one just sounds adorable, and sweet. Once again featuring a fake relationship (boy, these Harlequin manga do love that trope so so much), but also featuring a woman dedicated to help her fake boyfriend with his relationship with his son. Aww.

The way she was asked was a bit out of blue, I guess he has been gathering courage for some time now, and I was glad he did explain. They did seem to match quite well, I know, I know I have only known these characters for a few pages, but I love them. And I can see the spark. It just needs to fully ignite. And throughout the story we see these two get along very nicely, and I was just shipping them like crazy. Eeep, so adorable. Those romance parts. swoons I was just so tearing up when he brought her home after Thanksgiving and didn’t let her go until they got interrupted by something. Awwwwwwww. wants these two to kiss and say that they like each other

Wow, wow. That poor girl. That is just terrible, I can imagine that she was shocked seeing her fake boyfriend’s son. After all that, anyone would be in tears and have a hard time. 🙁

It seems that Merry has her hands full figuring out what is going on between her fake boyfriend and his son. I thought first that his son would be a grumpy teenager, but it is a tiny boy who apparently misses his dad so so much.

Bro, no just no. You just had sex, you had a wonderful time, and then you tell her she needs to play fake girlfriend again? No. Not classy man. Not classy.

I am not crying. Just got something in my eyes, really. That part when she talked with Peter’s son, it was just perfect. She finally told someone she had a son, and their conversation was just so sweet.

This manga is making me cry. sniffles Yep, I am crying so much now. From that Sean talk moment to the end, one stream.

The art was just so fabulous and glittery. Well, maybe not always, but still for most it was that.

Oh my gosh, this was just the best out of all the Harlequin manga I read from this batch. OMG, this one is just one you NEED to read for Christmas. Be prepared, tears will flow. Bring tissues.