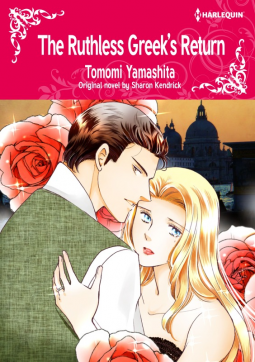 Only 3 more Harlequin Manga to go (counting this one), and then I am all out of them again. sighs I will miss them, I tried pacing myself when I got to 10, but I just want to read them all, in one go. Help me! Send help!

I was a bit worried about this one due to the revenge part. I mean, it is not like it was her fault that her dad didn’t want them to have a relationship (+ later that we find out the dad also called our guy very mean names and did some more crappy poopy things). You should rage against the dad (though he isn’t alive, but eh). Oh well, I hoped it wasn’t too dramatic, and that maybe the revenge would be called off.

Dang, that dad was terrible. Good grief, controlling your daughter’s life to that point, and then also break off any relationships + spend all her money on stuff and leave her with an enormous debt. How could you. What kind of father does that to his child. Bah.

The past parts were pretty hard to read, not only because it featured the terrible controlling dad but also seeing two people who were so in love being broken apart due to some horrible man. Of course, I also had fun reading them as the romance just flowed out of the pages. You could see that these two had a very amazing connection, an amazing love.

I was a bit uncomfortable at how Loukas thought he could just possess our MC. No, just no. That elevator scene made me uncomfortable. You can’t just pounce on a girl like that. Have some respect. But he did show some sweet things when in Venice he saved her and also told her a certain thing about the watch she was wearing.

Venice! Ah, I still so hope to go one day, but I think it will remain a dream for a bit longer. I loved seeing Venice in this mangaka’s style, she can draw humans so well, but her backgrounds are also drop dead beautiful.

Yay, they had a chance to talk! Apparently dad did a bit more than be a potty mouth. I had a suspicion, come on this trope has been used to death. Dad doesn’t approve of guys dating his daughter, does x and y, causes all sorts of misunderstandings and hate.

Ha, and there is more drama. Good grief, can’t we just have a happy time for our couple? Does it really need to be filled with so much drama? Urgh. And the drama is just so dumb and stupid and ridiculous. If they argued about something that actually made sense I wouldn’t mind, but oh no.

Um, why did it take her so long to see who Loukas was and not that other guy? He has a scar. A big one even. People, please. Check your eyes. Now.

The ending was really sweet though, it did feel tad rushed, but I am still very happy and no, these aren’t tears, it is just cold here and my eyes sting. Yes, that is it. wipes at her eyes

The art is just gorgeous. I had high hopes because of the cover, and all my hopes turned into reality.

All in all, there was some stupid drama, but I was shipping these two together as soon as Loukas showed he could be a bit less bossy and less possessive. I was rooting for these two to connect again.