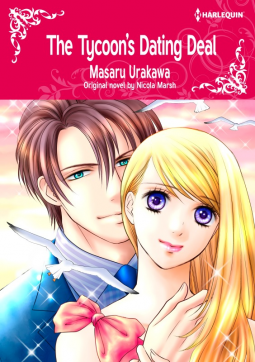 We first meet Matthew and Kara when they are tiny kids, and then later when they are both adults. My oh my, did Matthew fill out nicely there! 😛

I had a laugh at Sally persuading Kara to sign up for a matchmaking account for an event she is hosting. You just can’t say no to Sally (and I laughed at her Yes! face when she got Kara to her side). Though I have to wonder about those questions. I mean I can understand favourite eye colours, or what a romantic dinner entails. But the colour of your underwear? Ummmm. looks doubtful

And of course, Matthew is there. I am thinking that Sally planned and plotted this all. She did love these two together, and probably wants them together now. Mm. Good job Sally!

Though then I was a bit eh when we found out how far Kara went to get Matthew back in the days. I thought she was just in love with him, but it really creeped me out that she just stalked him, and even lay in his bed in her lingerie waiting for him. Girl…. Girlllllllll… nooooo. Just noooo. Just get the hint already.

Sadly, Matthew is pretty much a dick, you can’t just buy a girl. There is also so much drama. I was just rolling my eyes all the time. Because dear lord these two. Maybe they should just talk first about things instead of doing deals and such like this. Of course, I have seen this plot thousands of times (well, maybe not that much, but you get the idea), and I knew how it would end. sighs Sometimes I wish for less predictability. At least we had a rival for a few pages (and then later again), so that at least spiced things up a bit.

Oh, and we are supposed to feel sorry for Matthew? Um, why? Oh boohoohohoo his past was terrible? He has fooled around with tons of girls because of some dramatic bullpoopy reason? Urghhhh, he just needs to find love? Urgggghghhh. groans

Can Aunt Sally just for once not be so happy. You can see that Kara is totally sad and destroyed yet you stay preppy and happy. 😐

Also what was up with the clothes? Some of them were OK, but some were just disastrous. Like frills everywhere. Or hats that look like they should just have stayed in a garden. Dear heavens.

The ending? I called it! I did! Still, I had a few tears because it was sweet, even if it was highly predictable. 😛

The art, well, with the exception of the clothes, was pretty decent.

All in all, a drama-filled cliche story, but I still liked it.