Finally, I have internet again (no clue how long), so welcome to the Release Week Blitz for Ragnarok Unbound by Kristin Jacques! A book full of magic, gods and goddesses, powers, and more.

For today’s post I got a superlong excerpt, a giveaway, and of course information on the book/author!

Now before we start with all these awesome things, I want to congratulate the author on their book coming out in the world. Hip hip hooray! Happy Book Birthday! 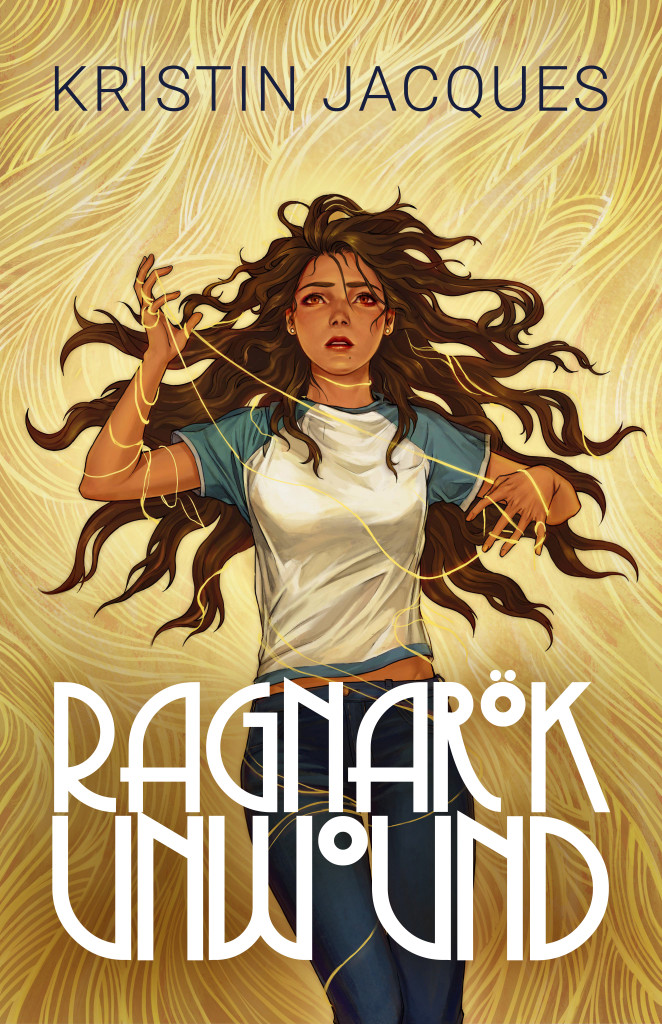 Just ask Ikepela Ives, whose estranged mother left her with the power to unravel the binding threads of fate. Stuck with immortal power in a mortal body, Ives has turned her back on the duty she never wanted.

But it turns out she can’t run from her fate forever, not now that Ragnarok has been set in motion and the god at the center of that tangled mess has gone missing. With a ragtag group of companions—including a brownie, a Valkyrie, and the goddess of death herself—Ives embarks on her first official mission as Fate Cipher—to save the world from doomsday.

Nothing she can’t handle. Right? 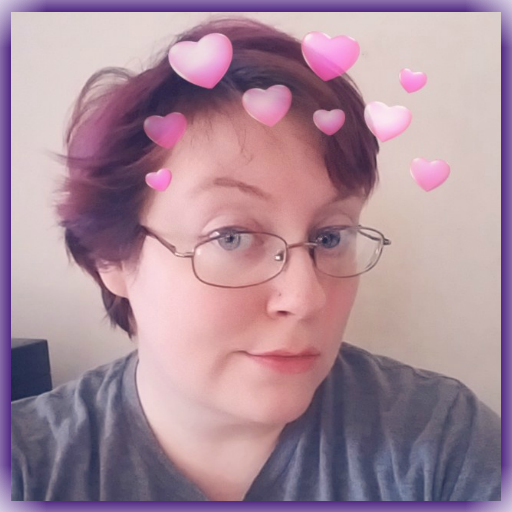 Kristin Jacques is an author from small town New England. She grew up in the sticks, surrounded by river wildlife, and various swamp inhabitants. Somehow she managed to keep all her toes despite a run in with a snapper or two.
She lives with her husband and sons in another small New England town. She is mighty attached to them.
When not writing, she is likely reading, watching a terrific B-Horror flick, or further spoiling the family cats. Sometimes she has blue hair.

Ives nursed a double-shot Mai Tai, swiping through Tinder’s Friday night hopefuls when the Valkyrie plunked down on the bar stool next to her.

She was pretty sure it was a Valkyrie. She ran through the mental check list of mythical beings as she pointedly ignored the six-foot blonde boring holes into her skull with laser-focused baby blues. Definitely immortal, the woman gave off enough heat to melt the ice cubes in her Mai Tai. There were a few creatures that fit those physical parameters, but the Nordic runes tattooed around her biceps sealed the deal.

In a place like Johnny Ho’s Tiki Lounge, the blonde stood out. Aside from the glitzy name, Johnny Ho’s was more of a local watering hole than the tourist hotspot it aspired to be. Compared to the bronzed and burnt skin tones of Johnny’s native clientele, the Valkyrie practically glowed like a moon flower.

That was Ives’s sucktastic luck. Being sought out at her favorite hangout by an immortal bombshell was the appropriate end to this shitstorm of a day. Determined not to let the shieldmaiden interfere with her personal sob fest, Ives ducked her head and sipped her now watered-down drink. She swiped her thumb against the phone screen with a little too much vigor, sending a string of potentials to the virtual waste bin as she fought not to grind her teeth. Damn. She hated being stared at, and immortals were the worst for it. Most of them didn’t need to blink.

Hearing her full name made Ives jump, sloshing her drink onto her hand. She swore softly, and the blonde noted her reaction with a satisfied nod.

The Valkyrie leaned in with a muted clink of concealed metal, far too close for comfort, and stage-whispered, “I have come to secure your services.”

Ives briefly closed her eyes to keep from rolling them. No shit, Sherlock.

The bartender paused before them, quirking an eyebrow at the blonde as he placed a tumbler in front of her. “Here is your scotch neat, miss.”

The Valkyrie pulled back and beamed at the man. “Ah, thank you, good sir!” She slapped a handful of old, old coins on the bar as she threw back the drink in one swallow.

“Another, if you please,” she said, belching into her fist.

The bartender blinked at her. His eyes went unfocused, the same glazed-over expression most mortals got when they stared too long at a divine being. The Valkyrie frowned at him as the staring continued, waving a hand in front of his face.

“Nick, the lady asked for another,” said Ives, snapping him out of it with the sound of her voice.

The bartender shook himself; some of the glassiness in his eyes subsided. “Be right up,” he mumbled, shuffling away.

The Valkyrie turned to her. “What was wrong with that man?”

“IT grad, tattoos, and makes a mean grilled cheese,” Ives murmured, keeping her eyes on the Tinder profile screen as she ignored the persistent woman. “What girl can say no to grilled cheese?”

The Valkyrie drummed her fingers on the bar hard enough to rattle the tiny Tiki statue decor. “Ikepela Ives—”

“Treat me like a pirate and gimme that booty? Oh, that is too corny even for me,” said Ives.

Nick placed another scotch in front of the Valkyrie, scurrying off when he caught the thunderous expression on her face. Sparks of electricity crackled through her golden locks. That made Ives tense. Immortals who sucked at keeping a low profile were ones who didn’t care about collateral damage, which meant it was time to abandon Johnny Ho’s before things got ugly. Ives made a call without the aid of her cell. Come on, Jules.

“Ikepela Ives,” said the Valkyrie, at the end of her fuse, judging by the tone of her voice. “I demand an audience.”

“You call me by my first name one more time, and I will break your fingers,” said Ives.

She slurped the rest of her watery Mai Tai and slammed the glass down.

The woman snorted. “Where I come from, that is merely flirting.”

Ives squinted at her, fishing a rum-soaked cherry from the bottom of her glass. The alcohol was starting to hit, sending a warm flush through her cheeks and fuzzing her sense of self preservation. “How about a broken arm?”

“Ives!” A petite brunette popped up at Ives’s elbow, wrapping slender fingers around her forearm. She stared at the Valkyrie with wide eyes. “I think it’s time we get you home.” Her stature might be small, but her grip was iron, and she yanked Ives off the bar stool before she could insult the shieldmaiden further.

“I haven’t paid my tab,” Ives whined. She leaned heavily on her companion.

“I took care of it,” squeaked the tiny lady, steadying Ives when she tripped over the half step at the entrance. “How many shots of rum did Nick to put in there?”

“Three,” said Ives and held up four fingers. She giggled.

Tall, blonde, and sparky watched as they stumbled off, tracing a finger along the rim of her tumbler. She didn’t move to stop them, though she was clearly unhappy about Ives’s departure. Another insult Ives would no doubt pay for later when the Valkyrie caught up with her.

All she wanted from the evening was to drink away her good judgment while browsing for a possible playmate to cancel out an abysmal pisser of a day. Instead, here she was, making her ‘drunken’ escape with a Valkyrie’s glare burning her backside.

The two made it to the parking lot before Ives pressed her mouth to the smaller woman’s ear. “Are we in the clear, Jules?”

“Gigantor hasn’t followed us yet, but I doubt she’ll be long.” Jules nibbled her lip, eyeing Ives from beneath a mop of glossy brown curls. “I know it makes you a bit woozy, but we should take the express route home.”

Ives’s stomach flopped at the very mention of it. That Valkyrie was nothing but bad news. “Do it.”

Jules wrapped her thin arms around Ives’s waist. She felt a tug in her bowels and straight up through her spinal cord as the world wobbled at the edges. The next second, she blinked in her darkened apartment. Jules released her as reality caught up, squeezing her insides.

“Ugh!” Ives rushed for the bathroom and emptied the contents of her stomach. Jules paid good money for that Mai Tai too, well, she did since they shared her bank account.
Another grievance she could throw in the Valkyrie’s face. With a groan, she straightened to find her roommate waiting in the doorway with a fizzing glass of Alka-Seltzer. Ives took it with a grateful nod and drained its contents. The couch looked damned inviting, but she was fooling herself if she thought the Valkyrie wouldn’t track her here. Jules flit about the room, tidying nervously. After her third circuit rearranging the same stack of books, Ives came to a decision.

“We can’t stay here tonight,” she said, heading for her bedroom to snag her overnight bag. “We’ll head over to Dad’s. He won’t mind us crashing for the night.”
Jules squealed, clapping her hands together. “He’s sooo messy,” she said with a dreamy look.

Ives rolled her eyes. “You know you have an open invitation to stay at his house whenever the urge hits.” She regretted opening her mouth when Jules’s expression turned somber.

Ives flapped her hand at her apartment. “Hogwash. This place is spotless.”

Jules did have a gift for decluttering.

“You know what I mean,” said Jules, a sad smile lifting the corners of her mouth.
Ives braced herself on the bed, her bag open and waiting. She knew exactly what Jules meant. It was why she’d stayed with Ives. It was a mutual need. Jules had nowhere else to go. Ives had no other friends. She anchored Jules while Jules always had her back.
Ives tossed in a few random articles of clothing and gathered her toiletries while Jules secretly reorganized her bag with matching outfits. Her eye twitched when Ives dumped damp bottles of shampoo and conditioner on top of everything. Ives snapped her bag shut, throwing an arm around Jules’s shoulder as they exited their shared apartment.

“Just promise me—organize, no rearranging. The last time, I thought he was going to have an aneurysm when you cleaned the workshop,” said Ives.

Jules pouted. “I simply put all his tools in their proper places.”

“It took him a week to find his socket wrenches.”

That made Jules giggle, though her expression swung back to worried. “What about the shieldmaiden?”

Ives could feel a headache forming. The Valkyrie would catch up to them sooner rather than later, and what she represented made Ives’s skin crawl.

I’m not ready to do this.

A cold sweat dripped down her back. She forced a smile for her companion. “We’ll burn that bridge when we come to it.”