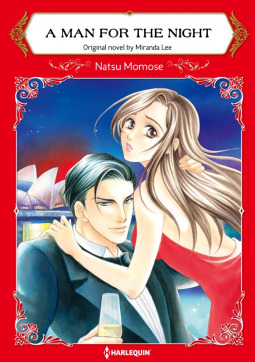 We are getting closer to the end of my Harlequin Manga party. On the one hand I am sad, but on the other hand, dang 19 of these were maybe a bit too much. 😛

I wasn’t sure how I felt about the cover, the girl is clearly uncomfortable and the guy just vibes out danger. The trope in this one isn’t that new, a girl hiring or asking a guy to act as her husband/boyfriend, until that moment they get truly together and boom sparks.

Soooooo, right from the bat we have some kinky cosplay sex. Yes, that sounds as wrong as it was. But then again, I could also kind of understand the appeal. Yes, I am terrible girl, lock me up. grins

Then it is back to before all that, and I was kind of agreeing with our girl here. I wouldn’t want to go to a class reunion EVER. No, thank you. School was terrible. Not because of the things I learned in classes, but the students. I guess our MC has kind of that problem, only not with many of her classmates, but just one. Who indeed looks like your popular girl with a whole bunch of attitude.

Um, I understand that a triosome is a bit too much, but to dump your boyfriend because of that? Eh. That seems to go very very far.

Haha, yes, that is an excellent idea, hire an escort. What could possibly go wrong?

Ohhhh, our girl is actually very much into sex. Oh my. It is quite surprising to me that she is a virgin then. I would think she would have tons of experience, but apparently it is all by reading and watching things. Oh girl. Oh girl. I just adored her fantasies throughout the manga, at times they made me quite laugh as she was in the midst of something and boom fantasy in her mind. She gets easily distracted by them.

I loved how Callum dissed up all the things he does in life and then also managed to make a cute and lovely comment. Go go Callum! And go away Amber. My Lord, what a snake that woman is.

It seems that both Callum and Josie want to have sex very very badly. I don’t think it is too long for them to have hot sex, especially given the first part of the manga with Callum dressed as a cop and Josie being pressed against the wall. And I was right. There we go. I guess all the reading she did has made her an expert given how many times they had sex. grins She even has a booklet, oh my goodness, lord, lady. Wow. She sure is prepared. And their first, or should I say second sex thingie, is apparently a public. Hot dang. This manga has more sex than any of my other Harlequin Manga. Phew, is it hot here or is it me? fans herself
Ah look, the invisible penis! It is here! It has appeared? Or well, a bit. 😛

Sorry, but what? I get that you are very much sexually frustrated, but to touch a guy who is sleeping? Um, nope. Nope. NOPE. Thankfully, it only happens once.

Nooooooo, why do you have to say goodbye. I know the week is over, but come on. COME ON, you two got a lot more going on than just lust and sex. I can see the spark! And I know both of you really like each other. Then again, we are nearing the end of the manga so I know that it will all be fine, but I am still frustrated that this had to be added. But I guess it made everything even better. Yes, I am a confusing person. I am confused myself on how I feel about it. But the ending was very happy and I love it. Though I do wonder why she has to give up on her fantasies now? I am sure Callum is more than eager to do some more fantasies with her, he seemed very eager to have her dress up and do all sorts of kinky stuff.

The art was pretty great, the sex was done very sexy, the invisible penis was a bit weird.

I also liked the afterword, though apparently the original novel is WAY steamier and even had S&M, bondage, and videotaping. Oh my.

All in all, a sweet and steamy story that I would recommend.