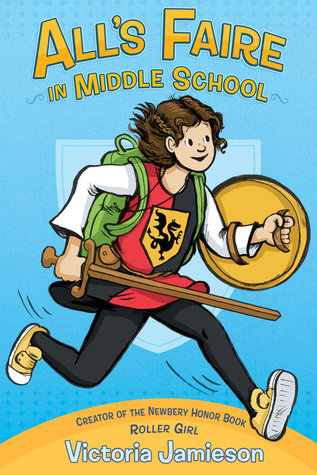 A girl, always homeschooled, starts with middle school and deals with all the confusing things there. Sadly, this one and I weren’t meant to be.

I was very excited to start this one, I loved the author’s other graphic novel, Roller Girl, and so I couldn’t wait to start this one. Sadly, it had good moments, but it also had many eh moments. Many many of those in the end.

I loved the Ren fair, and that she was eventually working there. Helping out her dad, trying to become a knight, juggling class and more, the craftshop her mom had (I want a wreath), the characters who worked there and the characters they played in the fair, the way they tried to make everything fun for the people who visited, the stories they told each year. It was just so much fun, and it reminded me of the time I visited Elfia.

I was also curious about this girl and how she went from homeschooled (something still so foreign to me and something I mostly only see in books or movies from the US) to middle school. But as soon as she hit MS she changed. From a sweet girl to a girl who should just talk about things for once and stop being so whiny. Also, given that she works at the fair, has so many social things happening around her, her social skills were pretty eh. Anyone knew that the group of girls were bad news, yet our MC sticks to them. And I get that somehow, it is a confusing place, but still, there were people who wanted to be her friends. Anita, the boy who sat next to her in class, one of the girls from the mean girl clique (who was nice).

What she did to her brother’s toy? Who the actual hell does that? I mean that is just ridiculous and hurtful. I get that she did it in a moment of anger, but it doesn’t make it better. I did like that she tried to make amends for what she did, but I can also imagine that her brother didn’t want to accept those amends.

I also didn’t like how she treated Anita. You can’t just treat someone shitty at one place and then happy go lucky at another. That is just hurtful and mean.

Plus, why was she so mean towards the girlfriend of Kit? Sure, she liked him (a lot it seems even if she says she isn’t doing that), but come on that girl is the sweetest and you treat her like that. She is trying to help you out, be there for you, is kind to you… Thankfully, later they do get closer, but it took a bit too long for me.

I was also a bit bored, the book seemed to go on and on and on.

Something that amazed me was that she was accused of bullying, and even got punishment for bullying due to some drawings she made. That someone ELSE spread around as her journal was stolen. Other than that one drawing of Anita, I don’t see how it is bullying. Isn’t every kid frustrated with their teacher? At least once? And don’t you want to throw that frustration at something? So you draw. Or you write things. I know I have done that. I know other kids from my school did it. And really, you don’t want to read my diary from that time. I had a pretty shitty time, and I drew, I wrote. If that is bullying, well fuck it, maybe you should go to actual bullies instead of focusing on a kid that is unhappy and feels unsure about what to do. But, I guess this Murica for you. I have read enough books to see that they are very easy in throwing the bullying thing around. I believe I even read one book were two characters had an argument (just an argument) and they got counselling for bullying. What the actual hell?

No. Also what was up with those parents? The way they treated Imogen… Hello that is not how parenting works :/ From what I could see while reading the parents just ignored her, stayed angry at her, at least the mom did. The dad eventually mellowed and talked to her. But sorry, that is just not how things should work. I get that she disappointed you, though again, not bullying, I get that she is frustrating as hell, I get that she has done some incredibly stupid things, I get that she has gone full puberty and is kicking against everything. And yes, you can be angry, but it is still your kid. Why are you treating her like this? Talk to her. Chat with her. Make sure she is OK. Because anyone can see she is not doing well.

The art was also pretty good, then again, I knew it would be good as I also liked the art in Roller Girl.

But yeah, all in all, this was quite frustrating at times. I am rating this book 1.5 stars for the art, for the fair, and for the old Imogen.