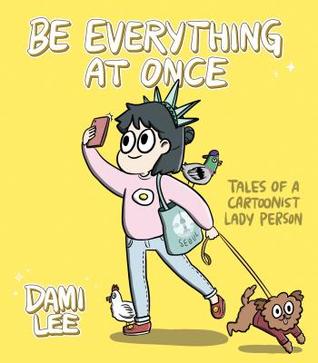 Eep! This book was just too fun, too good, but then again, I love Dami Lee’s work so it was no surprise!

First up, thank you to my sweet fiance for giving me this one for Christmas! I just love Dami Lee’s work, and so I had to have this book when I spotted it on her Twitter.

This book is mostly her comics, but there are also parts in between talking about eggs, about Korea, the fact that being bilingual is a great help when one wants to buy online, about family, about becoming a Cartoonist Lady Person. She has a fabulous writing style and I was looking forward to each in between part. I wanted to see what she would tell in that one. I read a few of them to my fiance (he is also a fan of her comics). We both had such a laugh about the in between parts about eggs. She kept on talking on and on why she picked it and then ended that it was just done because it was easy to draw. 😛

Also, I guess now we know what came first, chicken or egg. The chicken. In Dami’s childhood comics she is wearing a chicken shirt/sweater instead of her egg one she is wearing as adult.

Of course, as I follow and read Dami’s comics I knew most of the comics in this book. There are few I didn’t instantly recognise so either it has been too long or she added new ones. Did I mind though? Nah, I am happy to re-read her comics over and over again, they stay funny no matter how many times one reads them.

All in all, this was just the best, and I am glad that Dami Lee brought out this book. It makes me happy that my favourite artists are bringing out books featuring comics, stories, and more. I would highly recommend it if you want to laugh.