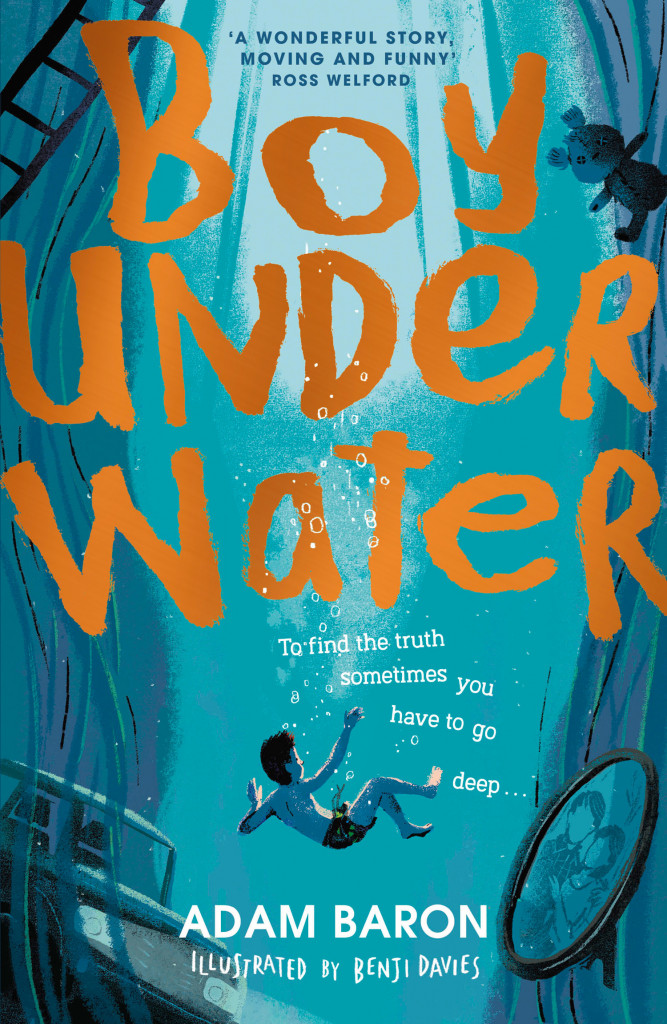 A wonderful story that made me cry on multiple occasions, though there were parts that were a bit lesser.

Meet Cymbeline a boy who has NEVER swum before. Yes, that is quite a shocker to me. I live in a country with tons of water and generally you are taught from early on how to swim. So I was shocked that he couldn’t. Later on when we find out what happened I was still wondering why the hell the mother never got her kid to learn how to swim. Here is a BIG spoiler on the ending, so don’t click on the spoiler tag. Instead of being honest about his swimming abilities he lies and so start the events of this book.

Because we can already see that Cymbeline’s mom isn’t that stable due to whatever happened in the past. She bursts out in crying at times, locks herself up in her room, but what happens at the swimming pool to Cymbeline? It breaks her completely and we see her get further and further adrift. My heart hurt, not just for her, but also for Cymbeline. Because he doesn’t have a clue what is going on. He just knows his mom hurts, that she has her moments, that his plushie is important to her.

The author really wrote the what is going on pretty well. Cymbeline is totally oblivious to what is going on and so we as the readers are oblivious to what happens as well. We really go on a journey with Cymbeline as he tries to figure out what is going on with his family, why his mom is this way, what happened to his dad. Thankfully, I was so happy for this, he is not alone in his journey. He gets help from two friends, Veronique (he likes her, really likes her) and another classmate who quickly becomes his friend.

I felt sorry for Cymbeline he had to live with his aunt and uncle and he just doesn’t want that. He wants to be with his mom. Plus, his aunt is at times quite distant, his uncle is barely there, and his nephew and niece are totally different from what he remembered.
I had a quick inkling that the marriage between aunt and uncle wasn’t exactly a happy one. And I can imagine, he is constantly away leaving her to care for the kids. 😐 I also knew soon that the lemonade definitely meant something else, especially since it meant for her to hang on the couch all the time.

Things get more hectic as Cymbeline’s birthday approaches. His mother disappears and a frantic search begins, Cymbeline gets more stressed and sad, and I was just heartbroken. That poor little boy. My heart broke even further when he said, to a room full of adults and friends, that it was a special day, and they asked why and he told them it was his birthday. I was crying at that moment because it was just so sad. Here we have a little boy, all alone, just wanting his mum, and then he realises what day it is and that he probably won’t be with his mom on this special day.

The author really wrote the mystery of what is going on really well. I actually hadn’t expected THAT to be what happened, and I do wonder why no one else had the guts to tell him. I get that he is 9 years old, but come on, this is his family. This is important. At least try to tell him. If he doesn’t understand you can always explain some more when he is older.

I loved how Cymbeline was written. So many times I wonder if a character is really that age, and it is hard to write little kids, but the author truly wrote a great 9-year old.

I had a laugh how he censored the curse words he heard and put a place/football thing instead of the curse.

Veronique? I was kind of hesitant about this girl, I have had one too many perfect smart girls in books and mostly they are obnoxious and pretentious. However, Veronique? Oh my, I just adore that girl! She was sweet, she was smart, but she NEVER rubbed it in, or made it seem like someone was lesser than her. And boy, that was a relief. She was so sweet towards Cymbeline, though I had a laugh at what she told him when he was still in stress about the whole everyone saw my penis during swimming-experience. And then later on when she asked about kissing. That was just awww and made me laugh!

The only thing I didn’t like, and this is truly the only thing, was the disconnection, or at least I would call it that. Near the end of the story we find out what is going on, why his mom is acting the way she did. I was really in the moment in those parts, I was crying when we found out. I was so so sad. However, instead of continuing the story normally we suddenly switch to I don’t how long later when Cymbeline is swimming and has had his swimming lessons. And then we switch back to those sad moments again, but sorry, I was out of it. The moment was ruined for me. And that is a shame. We have waited so long for this moment, it is such an important one, and I just don’t get why the author thought to just switch to a time after it. It is the one reason why I was considering to rate this book less, but eventually decided not to as the rest of the story was just AMAZING.

Phew, I think I could talk more about this book, but I think I hit most of the points I wanted to discuss. This was an amazing book and I just adored it so so so much. It was a beautiful, heartbreaking book, and really be sure to have tissues at hand when you read this one.