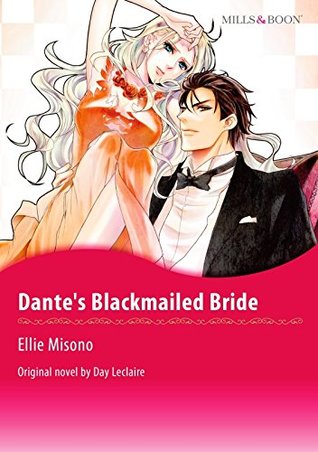 With this book we come to the end of my Harlequin Manga party! 19 manga, 20 days, and a girl who is kind of sad that it over because quite a few had cute romance, but is also happy with some rest from all the drama and standard tropes that fill these books.

This last one, I just adored the cover (I want her dress), and the blurb sounded quite steamy and hot. However, the title was a bit eh, blackmailed bride? Uh oh. That doesn’t sound too promising. Here is to it being quite different from what I would think from that title.

“It’s as though the darkness has melted away and revealed this beautiful sculpture of a man.” Oh my. And apparently it was kind of destiny that these two met. They are fated together. At least that is what I guess from it. I did have a laugh that they immediately had sex. I am not sure if that will lighten the electricity between you two, but hey, I am not complaining. The sex scene was very well drawn and very steamy.

Oh dear, drama starts! Not sure how I feel about it, but at least this time I saw it coming. She is a designer for a brand that used to be in the Dante family. He is a Dante. This can become very interesting. She doesn’t want to betray the new owners, and he wants to make her his. Yep. What could possibly go wrong.

I do like the magic element to this book. Namely the legend of the Dante family. If someone is fated with someone and they touch there is an inferno going on in them that won’t stop. That sounds indeed like both a blessing (you know your soulmate) and a curse (you can never get away from the feeling).

I did like that they had a chance to talk, talk about the curse, about family.

I did like that he wasn’t one to give up. Unlike most times I wasn’t that creeped out as he at least did nothing touchy-feely as she didn’t want that. He just gave her her favourite food, called her his treasure, gave her flowers. It was very sweet of him.

But of course, the drama gets on my nerves. I understand that he wants her, and that he also wants her to be in the Dante group. She is talented, and yes TH is going under, but to push her like this? To make her feel terrible as he has to choose between love and her father. 😐
Then again the whole business side to the story is also quite interesting, yes I am conflicting, sorry! It does make the characters show their true colours, we learn more about them during those confrontations (like that Dante isn’t the big villain he quite often seems to be).

The ending made me smile though, how everything just clicked together, how everything came together. How everyone got their happy ending. Not just Dante, not just Francesca, but also Kurt and Tina. It was wonderful.
“Wrapped in the inferno, happiness is ours!” Awwww!

The book also has quite a few more sex scenes than most of the Harlequin and they are also more clear. In the way of what was shown. Still no penises or vaginas, but way more boobs and way more suggestive. I did like it though.

All in all, this was a pretty decent love story with a magical element to it.