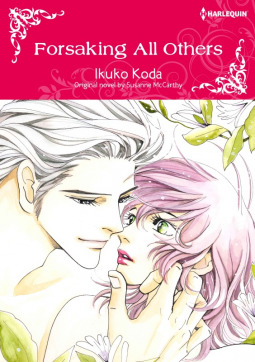 After a very disappointing previous Harlequin Manga, I was eager to start a new one. However, instead of picking one I knew I would like I just went ahead and went for one I was worried about to get it all out of the way. This one features another male guy who seems like an enormous dick. Making assumptions. Demanding the girl to do things for him. Pleasing his needs. Also that cover has me worried, such big hands are not healthy.

Wow, dude, what the hell? “Well, if you loved him, you wouldn’t have walked out and left him alone for the last six years. If you had just stayed by his side Jeremy might have been at home with you and not in a crazy accident.” Boy. What? Ever heard of marriages just not working out? No more love? Abuse? Other things? No. Guessed so.

Thankfully it is time for a flashback to what happened between Jeremy and Maddy. How they met. How Saski(a) was always around and also one of the causes why it went wrong. And how she also met Leo. Apparently he wasn’t always a mean guy. Wow, I didn’t expect Saski(a) to go for Leo. I agree, with everything I would have also expected her to marry Jeremy. And we finally hit the moment when Jeremy told Maddy about his cheating and her having to leave. :{

“And you, Julia, shouldn’t you ask about what happened before demanding apologies?” Hey, this is the pot calling the kettle black.

So you just kissed a girl to test her feelings for her dead husband? What the actual hell? Oh, and then he asks her to marry him so he can help support her.

sighsI am mostly just speedreading through this one, I am so utterly bored at the story, the characters are flatter than flat (like paper), and the romance is non-existent. I don’t even see a spark. Which would be nice, maybe the flat characters would ignite then.

Wow, whoring yourself out to save a place. sighs Dude, really, she needs to rest. I know your dick probably can keep going, but believe me vaginas only last so long before it starts to hurt.

Of course… we are nearing the end and now everything is thrown on the table. All the secrets are out. And now we are supposed to feel sorry for all parties? Or root for them as they can now have a fun romance? Heck no. And well duh, of course she wouldn’t tell him. He was a dick throughout the entire book, and even forcing her to have sex with him (I don’t care that she actually wanted it, it still was so so wrong in my eyes).

The ending, way too sugary for me after all that crap from this story.

The art was pretty nice. Though the eyes were at times a bit wibbly wobbly.

So yeah, glad I got this one done. It had some good moments, but mostly it just was terrible. I still don’t like Leo.