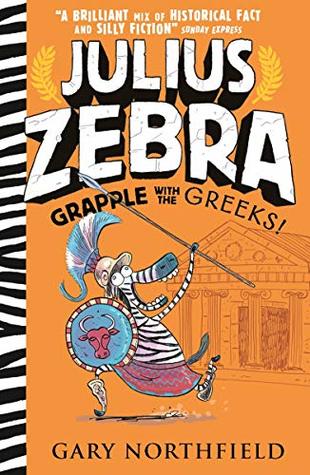 Julius Zebra is back, and yet again his vacation is going wayyyyy different than he was hoping it would be.

Remember where we left off last time? Yep, Milus who was thrown into the air by a bulky guy? Named Heracles? Yep, that Heracles! The book immediately starts off from where the previous book started and I loved it. Yes, it has been some time since I last read the previous book, but it was like I never left. I could just step in, laugh and enjoy this story.

This time we have tons of mythology and greek legends (and gods) making their way into our lives (and that of Julius and his friends). Heracles needs someone to do something for him, and after some bumpy things (including stones being thrown around haphazardly) they go with Heracles to find that apple.

I did think it was quite hilarious that even though Julius friends weren’t always happy with the situation, the idea of immortality appealed to them all (and rock collecting for one animal, I will leave you to guess who that is). And so the quest starts, and from that moment the story gets more and more hilarious as meet giants who can’t handle water, we see them throw a ball of yarn at a Minotaur (because none of them thought that maybe it was better to use it to find the way back), we see them meet a many headed dragon, make a wooden zebra (or is a horse) to get into a place, and oh yes, avoid all the Romans. As Julius is a very sought after zebra. Everyone wants him, and it does complicate matters in this book, which made everything even further fun to read as our heroes have to do all sorts of silly things to avoid detection (including massaging their enemies, no don’t ask).

I loved seeing all my favourite Greek gods and legends and more pop by. Every time I thought we wouldn’t be getting a visit from that person, boom, there they were. Like Midas. I hadn’t expected we would see him.
Oh, and I had a suspicion on Heracles’ motives for asking Julius, and it was fun (and at one point sad) to see our group also find those motives out as they do meet characters who had the same happening to them thanks to Heracles.

We also meet with old friends, and I was happy (and not so happy depending on who it was) to see them again.

I love the interactions between the characters, at times I wonder how they are friends with Julius, but then again, without Julius their lives would be plenty of boring, so I can imagine they go along with him. Oh, and one of them may just do it for the rocks, but that is a whole different matter.

Of course, just like all the other books, this book is delightfully illustrated which makes the book even more fun to read. Quite often the illustrations continue the story.

Given the ending I am already excited for the next book, yes, there will be more. Plus, I saw there is a joke book coming out, and I need it in my life.

I would highly recommend this book to everyone. You won’t be bored one bit while reading this story, instead you may be in danger of falling of your chair/bean bag/couch and rolling on the floor.