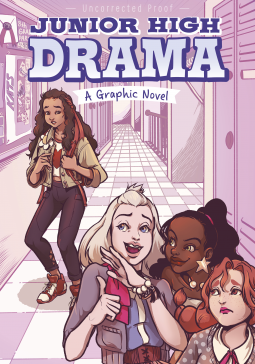 So, I hadn’t expected this one to feature multiple characters. I just thought it would be the girl on the cover. Yes, I didn’t really read the blurb, I just saw the cover. 😛 I was a bit confused when the next story popped up with a new character, but in the end I am definitely delighted with more characters. I didn’t see that this was featured in the same school. It isn’t until the end that you see everything truly connect. I wish that this had been done better.

First girl up is Kamilla, a sweet girl with a killer voice, but she has a problem. She is very insecure about her weight. She thinks she is fat and big, and just wishes to hide or get smaller. I did like Kamilla, though I did want to shake her a bit at times. How she fell out against her friend who just wanted to comfort her and then got the whole: You are thin, you don’t understand. Gee, girl… chill. Your friend is just worried about you, and you aren’t making it easier by being grumpy and not saying much about it.
I did like that the teacher didn’t give up on her, made her alternate, and then later also did that. The teacher is truly wonderful. Thanks to that teacher Kamilla finally realised that maybe she should just go for it. It also helps that she found someone special in her life who supported her, not only with her singing, but also when she was trying to do more exercise. I would give Kamilla’s story 4 stars.

Next up is Lily, a girl who wants to be popular and with the in-crowd. I was quite interested to see what she would do to get into the crowd, but it seems she only had to have one thing, a hot older brother. 😛
I liked how she tried to still be friends with her other best friend (and even tried protecting her) even when she got closer to the in-crowd. However, of course, nothing ever goes right, it is the mean girl crowd after all, and Lily finds her on the bullied end when certain things happen. I felt oh so sorry for her, and was rooting for her to stand up, or at least find someone to talk to about it. Because bullying is a big no-no.
I don’t really understand why these girls called Lily fat, given the art, especially given that in the art they all seem a bit more chubby. Oh well, I guess they were just desperately looking for something to call Lily.
Lily’s best friend was just perfect. I love how she is not afraid to give her opinion, how she is happy in her own skin, and I love that she is in the anime club! The ending was pretty OK. I would give Lily’s story a 3 stars.

Allie, the girl who can run fast like lightning. After a meet goes wrong (so very wrong) she discovers she has diabetes. You can imagine her life goes topsyturvy and she isn’t the happiest about things. She has to check her sugar levels, she can’t eat too much sugary stuff, she has to go healthy, she has to give herself a shot if things go wrong. Throughout the book we see her come to terms with her illness. I have to say I did wanted to shake her and tell her she should just confide in her friends. Instead she hides, is grumpy to hell. Again, I get that it is hard for her, I understand that, for a teen, it is not something you want to tell the world. But a lot of things in this book could have been prevented if our girl had just been honest. If she just had sought out some support.
I also wasn’t too happy how she treated her parents. Girl, they are just trying to make sure you don’t land in the hospital again. They are just trying to care for you. You should be happy you have such wonderful parents. I would give Lily’s story 3 stars.

And the last girl is: Lucia. A girl who is a bit like me at that age. I just wasn’t too interested in boys. Didn’t get the fuss. What was so special about them? But I did get annoyed with her. Her story was definitely the least favourite because for most of the book she is whining and complaining and just being eh about the party. If you don’t want to go, just don’t go. I didn’t get why she was making such a big deal out of it. But of course, like so many cliche stories, she meets a guy she likes (yep, suddenly she doesn’t think boys are that bad and hey that party is also cool).
While I did like the two of them together, they did make a cute match, it just felt a bit too cliche. Instead of her just coming to terms with her feelings and tell people no I don’t want to go to the party, she falls in love.
I would rate Lucia’s story a 2 star.

I liked how everything got connected at the end, how we saw the various clubs, teams, and more.

One thing I didn’t like was how often the ending just came out of nowhere. They felt rushed. Like with Lily’s story, how she goes from afraid of the bullies and sad to standing up against them and being very strong in just a few pages.

The art however was just fabulous, I really love the style, the way the characters were drawn (and the amount of attention to the clothes, hair, and faces).

All in all, I am still happy I read this book. It was quite fun, but yeah, some things could have been better.