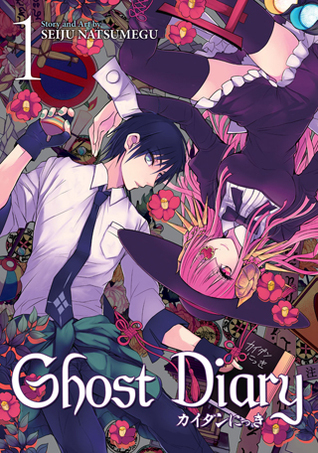 Mystery, ghosts, a missing sister, a sexy reaper, and more.

I picked this one for my Copycat Challenge in one of my groups. I do love supernatural manga, especially ones with a different ghost each chapter while also having a continuous story running through the whole volume. Plus the art looked fabulous.

It all starts in the past, we learn of Sukami’s sister who is an excellent exorcist, but then one day she disappears. In that first chapter we learn what happened, why she disappeared (and how). We see Sukami and his friends, and boy, I did think he was dumb. Yes, I get that you want to be as big as you sister, but to defy a god? To go against it? Eh. Not the brightest of ideas. We meet up with Sukami’s friends, and the occult club they have. I loved that these kids had (and later on still have) a club about the occult. Figuring out mysteries and going after them. Having Sukami of course save the day 99% of the times (the other 1% will be belonging to a character we meet later on, Chloe).

Throughout this manga we see that Sukami, after 6 years, is still not over his sister. He is still searching for her, and still hoping to see her again. Now with Chloe it seems he may see her someday in the future. I did think his infatuation with his sister was a bit too much. He didn’t even notice that there is another girl in his life who is in love with him, he only talks, and seemingly cares, for his sister. 😐 Come on dude. I get you love her, but you should also look around you some more.

Each chapter is a new mystery, a new horror. From a phantom macaron (yes, really) who murders girls and grinds them up for ingredients (ewww) to a sexy reaper girl who becomes their ally. I loved seeing all the mysteries, but I also loved that each chapter told us a bit more about the sister, Sukami’s friendship with his friend and how they met. It is mystery of the week but now with something extra.

I did think it was hilarious that everyone looked pretty much the same as they did 6 years ago. For most (with the exception of Kukuri) they just got taller. 😛

Chloe was a nice addition, very sexy too. Sure, at first I didn’t like her that much, how she tried to kill Sukami’s friends as they were in the way, and yes, I got annoyed with her Moi and Toi crap, but eventually I liked her more and more. She was a good addition to the team, and I loved that she did help Sukami out (like with the Phantom Macaron, Sukami has tons more to learn).

The last chapter? With the theme park? Oh man, that made me feel uncomfortable, or at least from the moment Mayumi got drugged. I am glad that Sukami came to the rescue, because heaven’s I don’t want to know how much further this would have gone shivers.

The art is pretty nicely done. I do love the character designs, especially the eyes (though at some points they are a bit creepy).

But while I did have tons of fun, I was also a bit bored at times, and again the whole sister infatuation was also getting a bit too much for me at times. I felt sorry for Mayumi. I will continue reading though. It is a short manga with only 3 volumes. I am curious if he will complete the book and if he will meet up with his sister again.