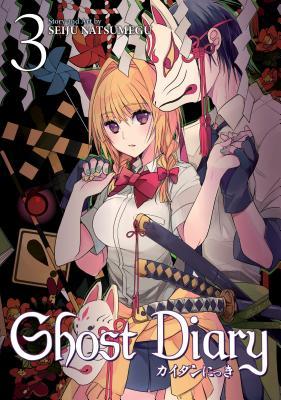 The final volume in this series!

I am a bit sad that is over already, as this had some very good stories. Creepy stories filled with things that go bump in the night. But, I am also happy that it stopped here. Because I also can’t see how this one would continue much longer.

So the first chapter and there is some kind of creepy monster around, named the Wiggler. A demon that, when you look it in the eye, will turn you insane. Ohhhh. So it was quite exciting to see how our group of friends was trying to catch it and not turn insane. I was pissed at Mayumi for just not understanding that she has powers and that yes she can exorcise, but without practise things will go bonkers soon. Come on, do you think Hanaichi or Chloe just magically were perfect in their skills? No, that is training. That is learning.
The ending, OH MY GOSH. That is quite the twist, and I am burning to see what secrets the parents are holding away from Kyouchi.

Um, why is detective not a possible goal? I can imagine maybe you should also have some back-up goals, but detective shouldn’t be so hard if you really work hard. Then again, given that Saeki has no skill whatsoever I think it may indeed be quite impossible unless he really picks up the pace and gets to actually doing schoolwork.
Oh dear, Chloe has disappeared! I guess it has to do with what she heard that night, I guess she is either on a mission to find out if it is truth, or she is so shocked that she wandered off.
Saeki must be shocked when he saw what Chloe was doing, I was shocked, too. 🙁
OMG, OMG OMG OMG OMG OMG OMG, holy crap. I had some suspicion it would be that, but still I hadn’t seen it coming from that corner. That is a shocker. But it explains a whole ton of things.
Holy crap, I wanted to kick Saeki so so hard. What a freaking bastard. Poor Chloe, not only does he do that to her, but she also relives some very bad memories.
Holy poopballs, that ending to the chapter. Wow. That is messed up.

In the next chapter there is even more explanation as Kyouchi meets up with the Nameless God from the first volume. You know, the one he pissed off and thus the god took his sister? I had a suspicion things wouldn’t look good for Hanaichi even though she stayed positive and this one we see what has happened to her. Abuse. Tons of abuse. Given the previous chapters not just beatings but also rape. 😐
The ending was a bit weird, and while I had expected that they had to hurry along, just one more chapter left after all, I still had hoped for it to be a bit longer.

And now Kyouchi has disappeared, and Mayumi can search for him. Using the Ghost Diary. Yes… I am just not sure how I felt about it all. Plus the fact that apparently Mayumi’s powers just stem from Kyouchi. Not sure how I felt about that revelation, here I was delighted to have a pretty strong female character (next to Chloe and Hanaichi) and now it turns out to be that. I did think the two Shikigamis were adorable. We also meet up Saeki who has now fulfilled his life goal. Good for him, still don’t like him after the events from the past chapters.
I guess the last parts are now coming to a play. I am impressed that Mayumi keeps on going, there are several scary moments that would make most people turn away, but she loves Kyouchi too much to ever give up.
I loved that there were some more urban legends, and that they were creepy as hell.
The ending was so so sad. It broke my heart that he decided that (I had hoped for something else, but I guess this one fitted better with the story), but I am glad that they were able to meet up, starcrossed lovers these two.

All in all, a great series with pretty good characters, ghost stories/urban legends were good, there were some interesting twists and turns, the art was perfect. But there were also parts that I didn’t quite like (for instance the (almost) rape parts, several bits of the gore). Still, I would recommend this manga series to people.