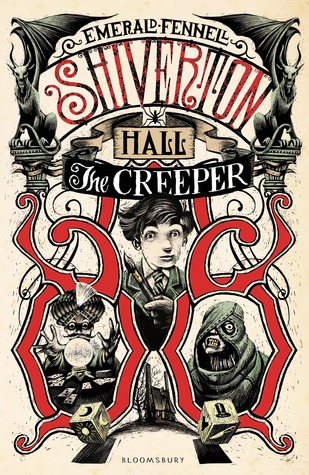 The second and, I am guessing due to the time that has passed between when the book came out and what time it is now, the last book. sighs I need more Shiverton in my life.

The book begins with an immediate creepy scene. A boy and his friend are going out to Shiverton at night. Yup, what could possibly go wrong? Well, a ton. We get a creepy book + our boy is going craycray. Not that long after we find out the kid has disappeared (and we all know that is language for dead).

The new term is here and there are all sorts of new things happening. Like the kids having to do some kind of chore every Wednesday. Which varied from working to having a good old time, which seemed kind of odd to me, but eh, boarding schools are weird I guess?

Can I say I actually felt sorry for Jake? He went through quite a bit in the past book, and now some more things. Poor guy.

There are once again tons of creepy Shiverton Hall stories featuring all sorts of spooky and big NOPENopityNOPEs. Like a typewriter that will suck your soul out. A guy who likes wearing people’s skin (eewwwwww). We see what happened to the daughter of Ma Watkins. I was definitely spooked, but also very eager to read these. The author sure knows how to write creepy horror stories.

The ending was pretty exciting, however I am also disappointed.

I am still amazed that Arthur hasn’t told anyone about his family, who he truly is. Then again, given everything, maybe it was for the best. I am pretty sure people would have acted pretty messy, especially given what has happened that one summer. But I am sure his friends would understand, or tried to help him with what he was going to through.
Oh, and there was a nice twist about who the burned man was. Namely…. drumroll please… Arthur’s dad…. Yeeeeeeeeeeeeep. Didn’t see that coming. Totally didn’t. I thought that guy was just some kind of spook/ghost/phantom/supernatural something.
The twist about who Mrs. Todd was? Oh I had suspicions about the lady, but her being Ma Watkins? And that all those creepy crawlers going around Shiverton/Grimstone are the kids she stole. Wooooowwww.

I kind of wish there were more books about Arthur, about Shiverton, because there is still a lot to be said and done, and I am sure there are more stories to be told from the past. More characters to be met. Ha, hopefully one day, but I guess it is a far-away dream.

I would recommend this one to everyone (and of course the first book).