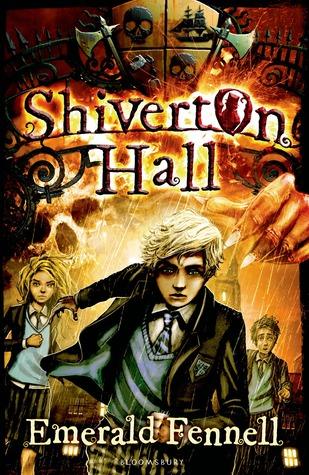 Welcome to Shiverton Hall, a place full of spooooooooky going-on’s.

Last week I was cleaning out some things and discovered a big pile of books that I had meant to read, but totally forgot about. Oopsie! Included in this pile was this book (and thankfully also its sequel so I can now continue reading this amazing series), and of course I had to try it out for the new year.

Our boy, Arthur, gets a mysterious acceptation letter to Shiverton Hall. He never signed up, he never did anything, it was just there, and he decided it would be OK to try it out. At first he is quite unsure about the place, and it doesn’t help we have some bullies (thankfully, very thankfully, they don’t get much screen time), but then he makes quick friends with the boy who is supposed to help him around the first days, George. Then we quickly have some other people join Arthur as his friends. Plus he has a girl that is infatuated with him (and she reminded me a bit of Luna from Harry Potter with how she acted/and based on the descriptions also looked).

I just adored the creepy stories that filled this book. Well, OK, maybe it wasn’t such a good idea to read about gore, death, and spooky things in the late evening/night, but eh. I just couldn’t stop reading. I had to know what happened at Shiverton Hall before Arthur arrived. What set the curse in motion and what kind of spooks and ghouls are attracted to this curse and the evil that surrounds Shiverton Hall.

I quite quickly figured out what happened to Arthur before he got to Shiverton, though for the full story (and the confirmation) we have to wait until almost the end. Poor Arthur. What he did was wrong, but I can understand that it happened. After so much torment, so much hurt, and then the idea they would go after his brother? Anyone would have snapped. 😐 I do hope that people are a bit kinder to him though, and don’t judge him too harshly on what happened.

I was NOPING a lot while reading. I mean, ghosts, sure. Creepy things go bump in the night? Why not. But dolls, big as human dolls… with broken faces? Eh. Clowns? Without arms? Yeeeeeeeep, I was NOPE NOPE NOPING, making my fiance wonder what was going on. 😛

The ending? Oh, man, it was amazing. Yes, I was a bit disappointed that the whole Friends thing ended so easily, it just felt like it could go on for much longer. But then we get some revelations, and some twists, and I was delighted again. Man, I hadn’t seen that one coming. And I thought I had figured out most of the going-on’s but it seems I missed this one. Wonderfully done! applauds.

All in all, this was just amazing, I had so much fun reading it and I couldn’t stop reading. I would highly recommend it if you are looking for a book full of creepy things. Be warned at times it may get a bit too creepy!

And I am going to be reading book 2, I need to know more about Shiverton Hall, and I want to know what will happen in this new book.