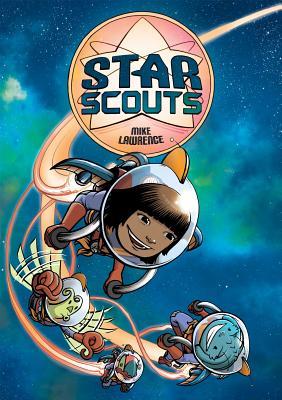 A girl gets teleported to space and is initiated in the best scout club ever: Star Scouts!

I have been meaning to read this book for some months now, never had the chance, until yesterday! I am quite delighted I had the chance to read this one, as it was just so much fun. I wish my scoutdays were as fun as Avani’s. Robots? Space suits? Building fun and exciting projects?

It all starts when Mabel, our alien, accidentally targets on Avani and teleports her to her space home. Yup, but thankfully both of them become quick friends (real quick even), they even have something in coming. Being scouts. Well, their scout stuff is vastly different but you get the idea.

I didn’t understand why Avani had to stay with the flower scouts. It was just such a boring group of scouts. Just doing frilly things, which is fun if you want to do them, but if you are like Avani (and someone else in her group, and me) you would be bored out of your skull. I could also relate to Avani just not connecting to her group. When I was that age I also didn’t have the biggest interest in all that stuff, that came much later.

The star scouts were just too much fun, all the things they did were things I would have loved to be doing at that age. Plus, come on, it is space! Aliens! Floating! Gravity is less (or more)! Jetpacks! And I also loved the group of scout who all quickly became friends with Avani and accepted her as one of her own.

The camp? I had a laugh how Avani managed to get her dad’s autograph for it, and then the camp really started. Avani with a ton of stuff (and I had a bigger laugh when she just poofed from that toilet, that poor girl), I loved the way gravity worked there, plus it was fun to see other scouts as well. Not to mention that there are two kinds, the ones who breathe in farts (sorry, not sorry) and those that breath oxygen. Then there were the various activities that had me smiling with a big grin, and wishing that I could participate.

The whole deal with Pam? Urgghh, that is definitely one of the biggest reasons why I rated this book less than I had planned to do. She was just annoying. Yes, she was offended by what Avani said, but hey, Avani is still new to this space stuff. And Pam was just a mean girl. I just wanted to throw her into space and leave her there.

There was some drama during the challenges that had me rolling my eyes.

One question. How come no one knew that our MC was missing the scout stuff? Unless she concocted a pretty good excuse.. but then again, I can’t imagine the flower scouts woman didn’t contact the MC’s dad as our MC missed week after week of scout meeting. Unless, I missed something and she cancelled, but I would say that she would need her dad’s permission for that. And so we come back to how come no one noticed.

I hope that Avani can be honest one day about what activities she does. Because I can’t imagine that she can keep lying about things for that long.

I liked the ending, and I am glad to see Avani has a new, human, friend.

The art was pretty OK. I liked the designs of the characters.

All in all, I will be continuing this series as I want to see what other adventures and fun things Avani and her friends will have/do.