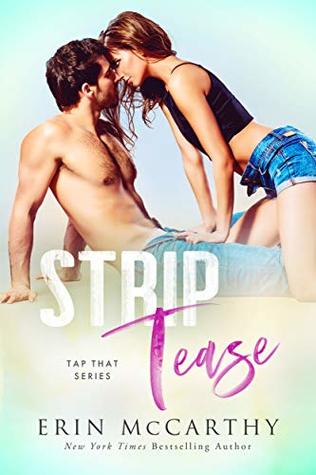 I received this book from InkslingerPR in exchange of an honest review!

An one-night stands ends with a pregnancy and now 9 years later our guy and girl meet again! After the wonderful surprise that the second Tap That book brought me, I just couldn’t resist but sign up when the opportunity knocked on my door to also review this new book in the series. This time featuring another couple though we would see older characters as well.

I was quite a bit busy this weekend, but I couldn’t resist starting this one while I was out with friends and my fiance. No worries, no one was ignored (much) while I was reading. There were just moments there were no conversations, and at times I just needed a bit of a time-out.

Meet Grace, meet Brandon (or should we call him Jeff ;P). They met up years ago and had hot sex… which ended with him being gone in the morning, a barely readable note left, and her pregnant. Yep. You read that right. The condom ripped/broke. 😐 Now she has the chance to meet up with Jeff/Brandon and let him know he has a kid, a girl named Fallon.

I was very excited to see how their meeting would go. How would Grace tell Brandon? How would Brandon react? Would he be delighted about the kid? Is there a chance for both of them to get together again?

I just adored how the author wrote Brandon, he was totally not what I expected. What did I expect? Well, from Grace’s POV it seemed he is quite the playboy and that generally doesn’t bode well for telling said playboy about kids. But he was actually really, really sweet. He immediately went to make sure that things were dealt with legally (monetary for instance). He was eager to see his daughter. He made sure that she was comfortable, didn’t push anything, just let her come to him and he was just such a good dad. He really fit the role of father really well, and I was just smiling.
So many times in books like this, a man finds out he has a child, it ends up in tears and the man being totally denying everything. It is very refreshing and delightful that we have a man here who is more than willing to do anything for his daughter. To make up for those years he missed.

I had a laugh that they didn’t even need to do a paternity test as he was just so obviously the father. We read about them comparing photographs and just seeing all the things pop out. Even Fallon noticed.

I loved how both Grace and Brandon tried to ease Fallon into this new situation, it was a pretty difficult one and I could see that Fallon was definitely trying to figure out how things worked and what she could do and not do. She was a bit bratty at points (but again, for good reason), but I loved how Grace and Brandon both handled it. Sure, Grace was a bit shocked at how her daughter treated her, but she just either didn’t respond to it, or told her clearly that this behaviour was a no-no.

We also see Grace and Brandon connect again. They discover they still have that chemistry. But Grace doesn’t want to make things complicated and I respect that. I am glad that she set those boundaries even though all she wanted to do was just get tons of orgasm courtesy of Brandon. I did like that she did tease him, and that they had their moments together. I was definitely rooting for these two to get together again. I have to say at times it was a bit unnatural, yes, especially as things got more and more serious, cue that one point in the story when he pops the M question. It just didn’t feel like the right moment. And I was sad that it was at this moment because I am sure there were better moments to do this. Especially as they had to hide it so much. I can imagine they are doing it for Fallon, but yeah, maybe they should have waited a bit longer.

Nearer to the end I just wanted to smack Brandon. He wanted all the benefits but none of the work, at least that is how it seemed to me. I can imagine that Grace got pissed off, if that was my love I would have reacted the same way.

Of course, there are some very sexy (and steamy) scenes in the book. And yes, I was reading a few of those in a public space, so you imagine that I was hoping no one would be reading over my shoulder or look at my screen. 😛

There was just ONE thing in the whole book I didn’t like. Namely the ending and what happened there. It was just a bit too coincidental and it just felt a bit unnatural to be frank. Even my fiance scoffed when I told him about. If it was like an epilogue taking place a few years later, sure, but now? Just no.

I love Beaver Bend, and it sounds like a place I would also love visiting. A lake to swim in? All sorts of outdoorsy things? Sign me up. Maybe not for all the time but for vacation I would love to go to this place.

All in all, I really need to get Tap That Book 1 (buying it soon), and also I hope that we will be getting more Tap That books, because I need more of them in my life. This one, just like the previous one, is recommended to all if you need some cute (but serious) romance in your life.