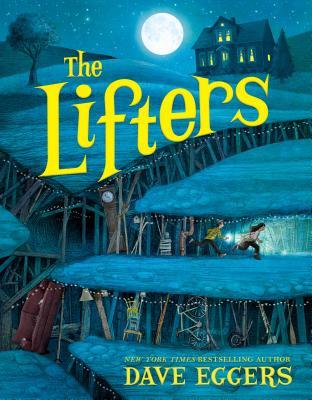 What is living under your town? And who will save your town from those things living down there?

I already tried this book before, in Dutch, didn’t like it that much, but still wanted to try it as I have had my fair share of trouble with translations before and I wanted to see if the original was better.

I will do a good/bad review.

Good:
-The Hollows and what they were. It is quite an intriguing idea that there is a monster (I would call it that) who feeds on despair/sorrow/anger and eats away the ground under towns and cities. We still have no idea how these creatures look, for most of the book they are just envisioned as wind. Angry, full-blown hurricane winds.
-The Lifters. How interesting that throughout the world we have kids (or small adults, as one needs to be small to do this work) who try to fix the badness that the Hollows make. The tunnels. They try to find supports, from hockey sticks to golden poles to shovels and a stack of teacups, to hold up the ceiling and make sure nothing comes down. No buildings get eaten.
The fact that they all had a Lift (handle that meant something to them or had significant meaning) and could open doors everywhere was so much fun, and I wish I had that power.
-I was curious to see what buildings would be eaten. Yes, it sounds horrible, but it just made everything more exciting. More of a race against the clock for our Lifters.
-The ending. It was just the best outcome for the town, and I loved that Catalina and Granite thought of that plan, and made it all happen.
-The tunnel illustrations at the beginning of each chapter.
-The illustrations throughout the book. I loved the style, they were more sketches than what we normally see as illustrations and it fitted so well with the book.
-A town named Carousel who used to make Carousels. And not just any carousels, but the best and the most fabulous ones.
-Again the town. It looked so beautiful, and I just adored the view from Granite’s home. If it wasn’t for the Hollows, I would have loved to live there.
-The conference that Granite and Catalina went to near the end. It was so much fun to see so many Lifters and also meet some of the bosses/important people. Then there is the fact there is apparently also a world meeting.

Bad:
-Granite. Sorry, I never liked that guy. Yes, he has some good moments, sure, but mostly… I mean he creepily stalks Catalina many times. He even stays and sits outside of a hill she went into for hours and hours. At one point she is sweaty and we have a comment from him on that.. eewwww. Then he gets kicked and punched by him, and apparently he doesn’t mind. But later on when she calls him a name (after already given enough hints that she isn’t liking him that much) he just collapsed and says she is mean. Um…. Oh, but later on he is immediately best buds again and is once again 100% infatuated with her. One time he just steals his mom’s wheelchair for Catalina. Wow, what if your mom has to go to the toilet? Or has an emergency? She cannot walk. She cannot escape then.
-Catalina. Catalina was even worse than Granite. I normally don’t use curse words in children’s books reviews, but Catalina was a bitch. Constantly berating Granite, being mean to him, confusing him, and even judging him because he has a watch (what the hell is up with that?).
I don’t want to waste more words on this girl.
-What is wrong with that teacher on page 229 (ish). She puts the kids on computers, and when Granite needs to go to toilet she ignores him multiple times until he finally just pees in his pants. Then when it is time for lunch he tries to tactically let her know about the accident, and instead of helping him she just tells him to get in line and go out. What the hell? Can someone fire her?

Not good/not bad:
-The drama between Granite’s parents.

So as you can see, good story, good mystery, wonderful illustrations, but terrible, terrible characters. 3.5 stars, which is still high, but I really enjoyed the story/mystery and some other elements.