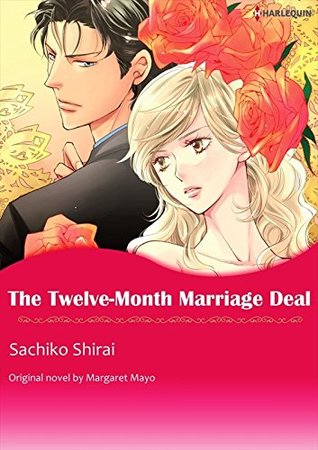 Slowly, but very surely, I am getting through my load of Harlequin Manga. After this one I still got 7 left, so the party isn’t ending just yet!

I was quite excited about this one, the cover looked quite WOW, and I also was interested about the blurb. Wherein our MC girl is thrown in as replacement for the sister that was supposed to marry but ran away. Will her sister come back? Will she fall in love with her forced husband? Drama? Romance?

Oh, I guess our girl got both a new hair colour and lenses. Why do I say that? Because on the cover she has white/blonde hair and yellow eyes. Yet, when we meet Elena as a teen she has green eyes and orange hair. 😛 Then again, this wouldn’t be the first time they messed up the colours on the characters.

Boy oh boy, instead of doing this rationally he just grabs the girl as soon as he hears about his missing fiance and then kisses her. Urgh, I am probably getting old but I am just not happy with forced kisses these days. I know that I did think they were romantic (past me, why?).

They have a conversation, as they should given that they are now fake engaged. We find out that Vidal doesn’t give a bullspoop about Reina and doesn’t seem to care about her running away. Is he really thinking that? Mm, one can never know with these Harlequin men. I can imagine that Elena is not happy, Reina is her sister and she wants her to be happy. Not marrying some guy who just wants to do it for status and how good it would look. 😐 Wow, things get even worse when he isn’t going to give up. Given everything it seems to take place in 20something not in 1900. Forcing a woman to marry? Making her feel guilty about it because if she doesn’t it would mean the downfall of her family’s bank.. .Wow.. And of course, add that element to it so that she will feel 100% guilty if she doesn’t do it. Dang. That is messed up.

“Then stop making such angry faces and try get along with me. It lessens the charm you finally got as a beautiful woman.” You what mate? wants to throw ice cold water over the dude

I love this girl btw. She got her own business (though due the marriage has to abandon it for a year which just sucks), she worked her butt off, even worked as a wedding planner. Dang this girl! I am glad that she was able to tell that all to Vidal, his reaction to it was priceless.

Oh dear lord, you said you wouldn’t have sex with him, but one forceful swoop on the bed and you do… Um.. This feels kind of wrong. Also they keep having sex. Wow, she isn’t even married to him that long, but she immediately changed her opinion on him. It just was weird. Instead of being happy they were getting together, I was unhappy. At the beginning Elena was so determined, so strong, so steadfast, and now she is falling for him and doing all the things she said she wouldn’t do. And sure, that is OK, but it still stood out a bit too much.

We also meet with Vidal’s brother, he was quite an interesting character, though I was worried about his intentions.

Of course, at the moment they both want to talk about their feelings, there is Reina. And apparently someone close to Vidal has hidden her. Dum dum dum. Let the drama begin! Oh my. And more drama, I definitely hadn’t expected that to happen, I would think that two adults should know to use THAT. 😐

Confession time, and sorry, I just wasn’t feeling it. This is one of those few times that I just don’t feel the connection between the characters. There are tiny sparks here and there, but all the drama and crappy stuff just made me turn off. It is a shame.

So yeah, not a big success. I did like the art though. And at times also the romance.