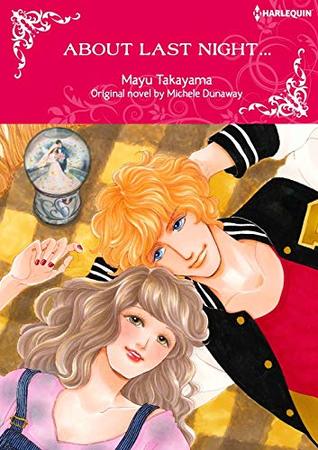 This one sounds hilarious as hell, a girl who had hot sex with her boss… but her boss doesn’t remember it and even recruits her to find her. snorts I also quite like the cover, though the art isn’t my cup of tea. But then again, I had that once before and then I loved the art inside. So who knows.

Oh my, I wasn’t happy that she ran away, but I guess her emotions took over. I would have loved to see the evening, we only see the aftermath and one panel of sex, but I guess this works as well. AH, he is another one of those playboys? Why do Harlequin Manga always love those so much?
Just a few pages later and we found out that the two of them got drunk, or well, Shane got so shitfaced that I can kind of imagine that he doesn’t know what happened/who he fucked with. 😛

Not sure how I felt that she only took the job so she would be noticed by the grandfather, at least I am happy she didn’t mean to have sex with him to get higher up.

Awwwwwwkkwwwwwarrrddd! She was planning to talk to him about last night/why she ran away, and here is her boss: “Could you look into who I spent last night with?”

Wow, the dude has some issues. She doesn’t want to (for obvious reasons), and tells him that he should do things on his own, come on he is 25 year old. He immediately assumes she is abandoning him? Whut? I guess his parents really did a crappy job at loving him/caring for him if he acts like this. Or maybe he is so used to getting what he wants that he is surprised that anyone would say no to him.

Haha, the grandfather is onto what these two did last night. And he is apparently not even that surprised that his grandson doesn’t know what happened. 😛

URGHHHHHHG. Really? What the hell? I am sorry, but I so tired of this plot device. Can’t you guys just fuck with protection? Seriously, it annoys me greatly. Oh, yes, let’s have a one-night stand. Teeehheeeee I am pregnant because we were too dumb to understand to use a condom or get the pill or whatever. Oh good grief. What the fuck is wrong with sex education in the land of Harlequin Manga?
WOW, WOW, hold on, granddad that is not your place to tell Shane that. I hate that he is the one to tell him and to just spoil it like that. Also did he tell the press about it? Since only Tina (best friend of Lindy), grandpa, and Shane know about it.
I am already not happy with this story, and still need around 90 pages. 😐

I did think Shane was overreacting. I get that he doesn’t want Lindy to go, but I didn’t like the drama he made out of it. Dude, reallY? You don’t even remember you had sex with her.

Dude, really? Do you think she wants to get married to you? “I decided a long time ago that I would never enter a loveless marriage.” Oh, ouch.

sighsMore plot conveniences and I was just rolling my eyes. He was so adamant on not doing THAT and here he is doing just THAT. I get that he wants to proof that he is capable (no he isn’t) to Lindy, but this is not the way.

I am getting tired of nosy grandpa. It was cute at first, but now? It just annoys me. Can that man find a hobby? Get a life?

sighs Am I supposed to swoon right now? Sorry, I just don’t feel that it was the right time for this action. She was so against it all, and now she is there? sighs But sure, I am happy that they had THE TALK. Finally. Though then it ended with that and that made me so unhappy. You didn’t want to enter a loveless marriage? The fuck woman? Is pregnancy messing with your head?

Oh, I am glad that we get the mom’s POV on why Shane was neglected. It made several things more clear, and I am also not that pissed at his parents. They tried, but they just went a bit too far and then it was too late.

Ah, look, and there is the drama! Right on time. Holy hell though, I hadn’t expected it to go that far. 🙁

Aww, that is so sweet of Shane’s parents to tell him that. I hope that they can make some happy memories now.

Though sorry, I just didn’t feel Shane’s confessions when he was beside her bed. It felt a bit too convenient. All the time he didn’t know/understand/couldn’t see it and BOOM, she is there, she might not do much more, and you suddenly love her? So if she hadn’t had that happening you wouldn’t have found it out? Wow. 😐

And the ending? It was just so rushed. I mean, she was still in the bed, not doing too well, and boom next page baby is getting blessed by Shane’s dad and the story is over. What? -1 star for that.

The art? Yeah, I mostly didn’t like it. The expressions were often very absurd, and while it works at times, at other times it just didn’t feel like the right time for those expressions. These expressions work better in a comedy, but not much in a romance. At least in my opinion.

So yeah, this was a disappointment.