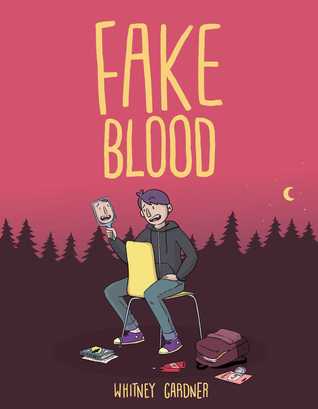 Vampires, crushes, figuring out how things work in life, going to a new grade, friendship, and more!

First up, thank you a really big thank you to my fiance for giving me this book as a present for my birthday! It has been on my list for ages and I was hoping to read it one day, and now I finally had that chance!

This was a magnificent graphic novel about a boy who has a crush on a girl who LOVES vampires and decides to also act like a vampire. Reading all he can about vampires, watching shows left and right, rubbing fake blood on his teeth (which looked oh so disgusting), asking his friends for help, stealing his sisters make-up (too look more dead). I had a laugh, but I also found it enormously adorable. I can imagine that he would do all that for someone, especially around that age when you are still unsure about things, you want to impress the girl but you feel like you are boring. I know back then I was also trying to find my own style, to find somewhere to belong. And yes, to me it also felt as if my friends were all changing and doing awesome stuff while I was just reading books.

I did love his friends Ivy and Hunter were pretty nice characters, though I do wish they were a bit more kinder to AJ (and well, AJ to them). It just seems weird that they would brag so much even to their best friend. I did love their bets and their banter. How they tried to best each other at things. From height to eating cookies.

The story was great fun and I had fun rooting for AJ. And it got even better with each page.

What more? Ah yes, I also loved all the vampire stuff. Seeing things like Twilight pop up (and Ivy bringing along glitter for AJ when he wants to be more vampire) were just lovely.

The one thing I didn’t like was Nia. Nia. I just couldn’t understand why AJ was so in love with her, I guess love does make blind. I am sorry, but I found Nia wayyyyyy to obsessed with vampires (to the point that she would even kill someone if she only had the slightest hint they may be a vampire), plus she was really mean and rude. She kept glaring at AJ in a not nice way, and I just wasn’t liking this girl.
Though I did love that she, of all people, didn’t get <spoiler> what Mr. Niles was. Instead she thought he was kind of like Rupert Giles from Buffy, a mentor type. snorts </spoiler>
And sure, I also liked that at least she was prepared if there ever was a real vampire. Holy Water Supersoaker, garlic, all that stuff.

I have to say I did have my suspicions about Mr. Niles, but… <spoiler>due to the direction the story went and how it seemed to go more in the way of realism, I didn’t think he was truly a vampire. So it was interesting that we did go that route and I was happy with it. It did make the story even more exciting and also flipped our character’s world that these creatures truly exist. I do wonder why Mr. Niles didn’t understand that both AJ and Hunter were faking it. Come on, it is pretty obvious, at least to me, but I guess Mr. Niles needs to go out a bit more…</spoiler>

The art was also fabulous. The style was really nice and I really liked the character designs (though I kept wondering what was wrong with Hunter’s nose).

I would HIGHLY recommend this book to everyone. Such a fun coming of age graphic novel with something extra!