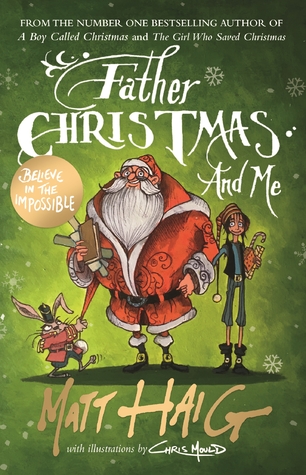 “Father Christmas lived at 7 Reindeeer Road, right next to Reindeer Field, on the edge of Elfhelm. His house, like many of the houses in Elfhelm, was made of reinforced gingerbread and -unlike almost all other houses in Elfhelm- it had a front door so large you didn’t have to bend forward to walk through it. “

I had to do a bit more effort for this one as Library #1 had put their Christmas books away as they noticed that people tend to borrow them less outside of the Christmas period. But then I had it, and oh boy, it is so shiny and glittery. I generally also try to read in season, but I am in a Matt Haig mood and didn’t want to wait another 10 months before reading this one. 😛

First up, who in all heavens wrote that blurb? From the blurb it sounds like The Easter Bunny is a BIG BIG part of the book… however… The Easter Bunny doesn’t even appear until page 212 of 288, and well.. he doesn’t really unleash anything until page 244. And there is quite a bit more to his attack/jealousy then you may think. 😐 It is a shame, I was really looking forward to an Easter Bunny attacking Christmas things, and so I was disappointed that he didn’t get much of a spotlight and was only added at the end. Most of this book is about Amelia and how she feels out of place in Elfhelm. How she is trying to find her spot between the elves and Father Christmas and Mary, trying her best in school.

This book is also apparently book 3 in a series, however I never had the feeling I had missed something. If anything this felt pretty much like a standalone. She tells us some stuff about what happened to Father Christmas, to her, to Mary, and it is enough information for me.

I quite liked Amelia, though at times I did think she was a bit too gloomy and complainy. I get that things aren’t easy, and as the book continues things get even more difficult, but I wished she would also see the good sides, and it takes her most of the book to finally see that she has friends, that she has a family, and that her life is pretty dang nice.
At times I did want to hug her, as the elves don’t make it easy for her. Which kind of surprised me as I always saw the Christmas elves as a happy bunch that will be warm and welcoming, but instead we see that so many of them are hurtful and judgemental. Of course, Vodol the baddie of this story also uses the fact that the elves are like this for his gain and for the loss of Father Christmas/Mary/Amelia.
She was still an interesting character, it was good to read about her past and what she went through in the past before she came to Elfhelm. Plus I loved that she was so good in riding a sleigh. I would have loved to see more sleigh riding. And around the end she sure showed a ton of bravery, and I was so proud of her coming so far. I was proud that she wanted to fix her own mistakes, trying to work to repay.

I loved reading about the subjects in the elves school. I am glad I am not following mathematics there, dear lord… though maybe I would have also been the best student if the answer can be snow. 😛

I read the Truth Pixie story first, and I was happy to see her here again. She also plays quite a vital role in the story and I was happy that she could be there for her love, Father Christmas.

Vodol was a truly well written villain. It was quite interesting to see why he did what he did, and how far he was going to be taking it. Sure, I didn’t like him at all, he was a pest and I was hoping someone would step up against them.

With the exception of the blurb that turned out to be a lie, I also didn’t like Captain Soot. It was nice that Amelia was able to bring her cat with her, but dang that cat was annoying as hell. He popped up in mostly the wrong situations causing more harm than good for Amelia. I wouldn’t have minded if the cat was gone.

The ending was a bit sad though, then again, I also can imagine why she choose that. Plus, I did like she picked that, I am sure she makes kids very happy.

The book is also delightfully illustrated by the fabulous Chris Mould, his illustrations made the story even more fun to read, and they were also one of the reasons (beside Matt Haig’s fun writing style) why I wanted to read this book.

All in all, I had great fun reading this book, but I do wish we had more Easter Bunny. He is such an interesting character and I quite liked him and finding out what makes him tick. This is a great book to read during Christmas, be sure to eat some delicious chocolate coins, or satsumas while reading. I would recommend this one!