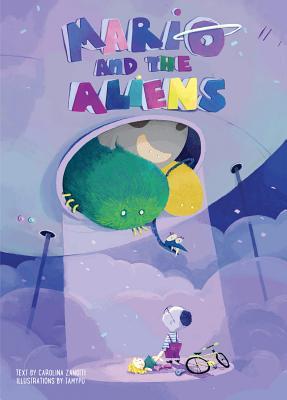 Sure, it was pretty much as I had hoped, a cute book about a boy befriending aliens. But however the underlining message wasn’t that much fun for me. So what if this kid wants to play on his PC all day? Improving his high scores. It just felt a bit too much like playing outside = good, playing the PC = bad. Especially given the reactions of the aliens, and how at the end our MC didn’t even miss his PC. But I guess it is a bit like how in my generation and a bit after that we were all warned of the big bad TV. These days TVs are passe so RIP PCs. 😛

But still, it was a cute book, and I did like that our MC found out about those games he used to play. He even played with the dolls of his sister (not sure if his sister approves of her dolls being used/taken away, but eh? tries to shrug it away). The aliens sure had a fun day playing and discovering new things to do.

I had a laugh at the names of the aliens + their planet. Is there also a Borefive? Or Borethree? is curious And I had a bigger laugh at the fact that these aliens have to go home early as their parents are telling them to come home. Given various things I thought the aliens were older (teens or adults), and not that they were kids.

The art was pretty gorgeous, I think it would work better in physical form, at times you had a double spread, but in my copy those were cut up, which kind of ruined the effect/fun. Why though did our little MC’s hair change so much in every page. From a bowl cut to a few strands here and there to something that I would say closely resembles a beret.

But all in all, even with the underlining message, I still had quite fun reading this one.