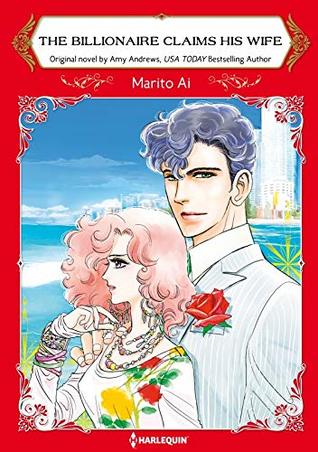 The party is almost over, just this one and then one more… and the Harlequin party is over. 🙁 I will miss these manga and I hope there will be more in the future.
The cover is absolutely beautiful, though what the hell is up with his hand????? But the blurb had me slightly doubting: Why does he want his wife back now when they’ve been estranged for ten years? Indeed, why all of the sudden does he want her? He is now rich so now he wants her back? Um…. But I am going to give it a shot. Crossing fingers that it is good.

Wow, what a weirdo. It is storming outside, he has a freaking fever, and he going to his ex? What the hell?
Her: “That ex-husband is sleeping in my house right now… which I won’t tell my mom.” No, I would also not tell my mum if my ex was just sleeping around in my house.
Also: “But you haven’t filed for divorce, so technically he’s still your husband.” Whut? You haven’t seen your hubbie in 10 years, you left him, but you never filed divorce? Why? That seems just very odd to me and weird as well. Maybe she kept hope? Still… why?

I was just awwing at the fact that the dog was so happy to see him again. Licking him and jumping on top of him. Aww! Look at that. SO cute!

Oh, he wants her back because someone important’s wife is coming onto him. I guess I can somehow imagine that he would like his wife back so that he has a good barrier against that girl, but still, it seems a bit overkill. I also think he should just tell Vince, if you are truly friends he will understand, yes he will be devastated, but at least it is a less convoluted solution.

sighsSo this is becoming yet another plot of two lovers who grew apart/two people having to get together for x time so that y or x will be fulfilled. I am so tired of those.

Wait? She paid him back in full in two years, and yet he isn’t satisfied and using it against her? Whut, why? How? is confused I am at least glad she is able to set some sort of thing against him. She will do it, if after those weeks she can get a divorce.

“Her real dream.. could it have been?” Gee dude you are dense as fuck.. What did you think then?

I do love that I see the true spark between these two. I don’t always have that with people who are forced together, but with these two? I am kind of rooting for Nate to understand what Jacqueline wants and that he may be finally ready for a family. Because I can see that Jacqueline still is very interested in him, come on she never said no to her mom when she was telling Jacqueline all about Nate (Jacqueline’s mom reads all the newspapers and gossip stuff).
That kiss, sure, I am not too happy as it felt a bit forced, was still hot when she answered back.

Can I say I just ADORE her dress on page 46? Dang, that is gorgeous and it fits her so well.

Yay! A very swoony and steamy sex scene happens. Yes, she said no sex/no kisses, but apparently she just can’t resist him, just as he can’t resist her. I am also glad that we, during the sex scenes which felt a bit odd, find out more about their past.

Ah, and right on time. It is page 70+ and here is the drama. It is so hilarious that that always happens at this point. It was a bit silly, but I guess it was also expected. I did love how Jacqueline took the side of her husband (yes, it was a bit of acting, but I do feel it was also a bit of truth), it was pretty hilarious though with how the guys stood there with a look on their face and didn’t know what to do. The girls were about to go full catfight though. 😛 I hope the whole deal with Vince and Abigail will be resolved, poor Vince though. 🙁

Oh no, more drama happens. Dude, you should really think over your words. You know how much those things mean to her. You should have said it way differently, pick a different time.

snortsSorry, but it doesn’t seem like a bright idea to get in chopper and then in the storm go to your wife… It seems Nate loves dramatic gestures. Maybe he should think a bit more before doing things.

Awww! They finally had the good talk, they finally told each other their feelings and I was just awwwing the whole time, and yes, I am also crying because it was beautiful. That last image on page 127 was just so sweet, and it made me so so happy.

The art was just amazingly beautiful. I loved the characters and how they were drawn, but other things were also done beautifully. I need more art by this artist.

I also liked the afterword by the artist. What kind of decisions she made, the changes she did. I always love it when these things are added!

All in all, even with some bumps in the road, I really liked this manga, it was a sweet and realistic (well mostly realistic) story about two people finding each other again, finding their love. Recommended!